Yesterday, two now 8th grade students (Jane & Sam) and I had the wonderful opportunity to attend the first ever White House Maker Faire.  Our invitation came as a result of our proposal describing our work with the Advanced Light Source earlier this school year, where we used high energy xrays to scan small samples, then 3D-printed them out many times their actual size.  (Feel free to check out the ALS news briefs following our adventures from the initial student field experience, through the Maker Faire results and our invitation to the White House!)

I want to begin by recognizing the many people in addition to Jane and Sam that our invitation recognizes.  Thanks to: 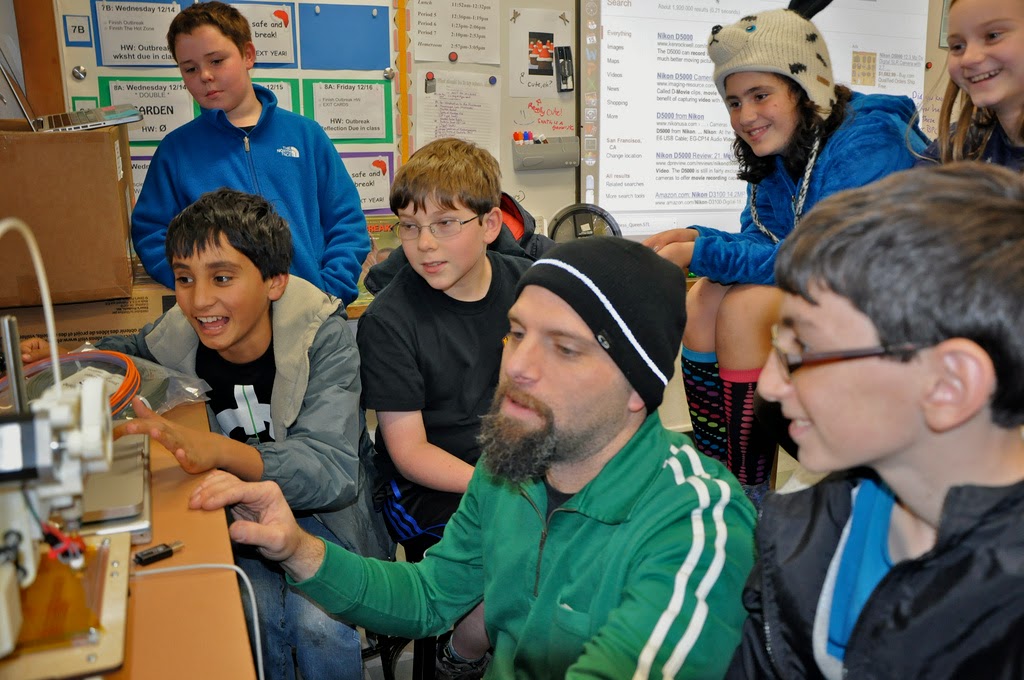 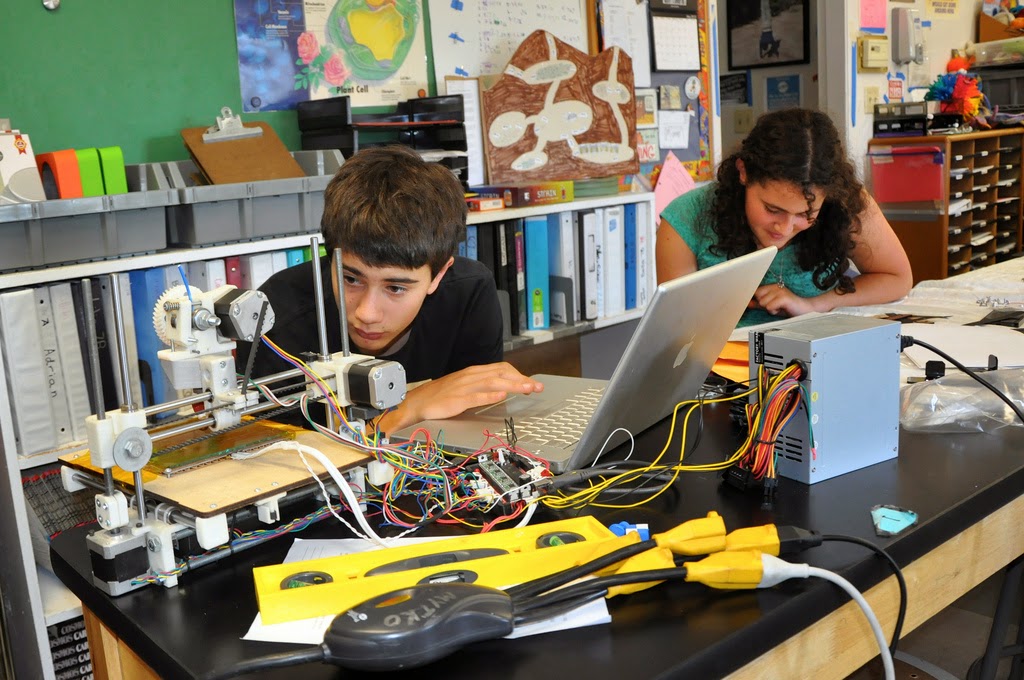 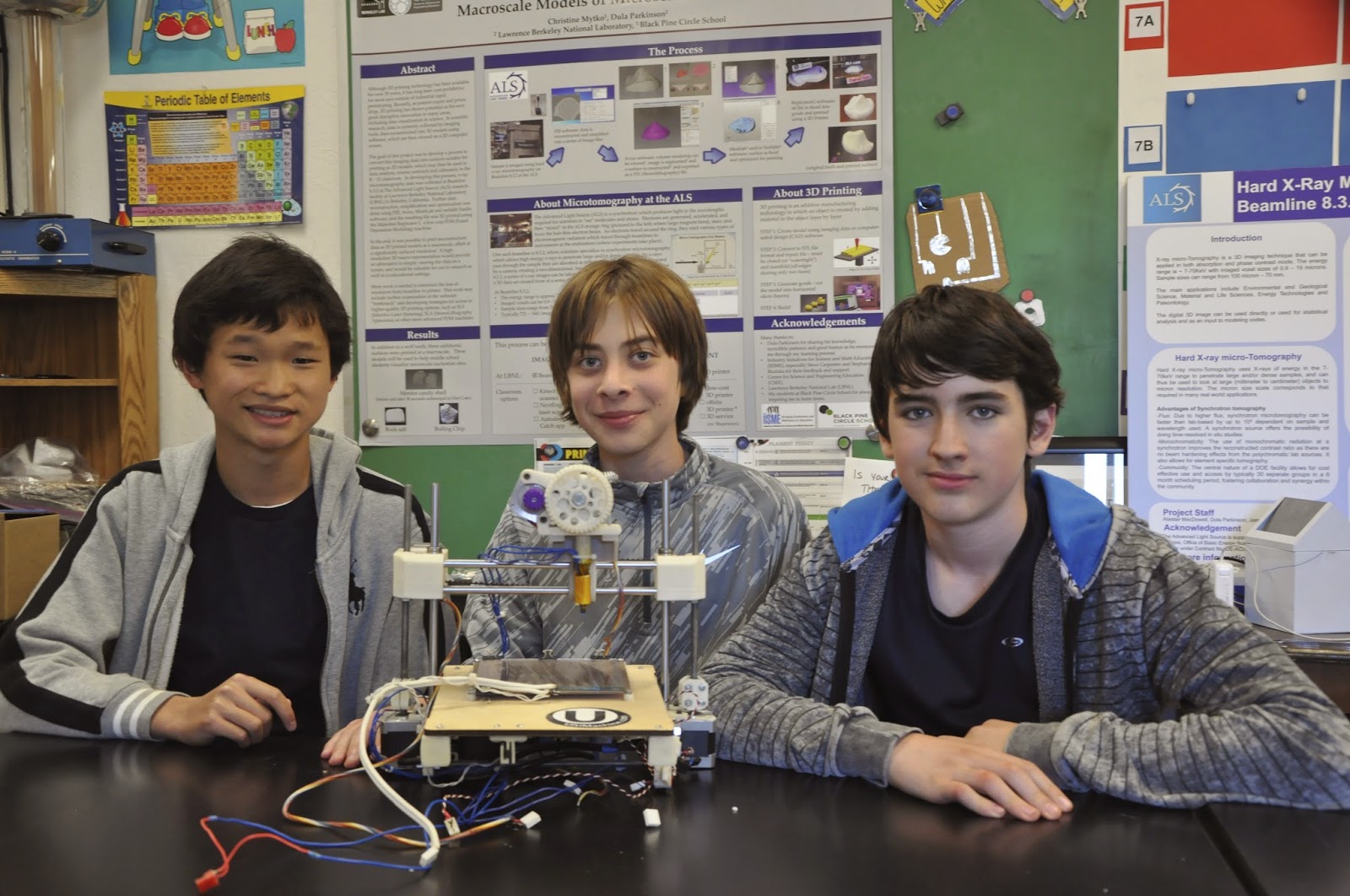 I am sure we are leaving folks off this list, but the point is that the kids (and their teacher!) did not accomplish this on their own and we are grateful for the opportunities for collaboration we have experienced along the way.

As for the White House Maker Faire itself, It was fabulous to see so many inspiring people in one room. Dean Kamen, Super Awesome Sylvia, Will.i.am, the guys from Open ROV, and Caine from Caine's Arcade! And of course, an honor to hear the President speak!

President Obama officially declared June 18th a National Day of Making! Watch his speech below (or read the text here.)  If you'd like to learn more, you can check out the White House Maker Faire Fact Sheet or the Presidential Proclamation -- National Day of Making, 2014 (a copy of which, you may not be surprised, will be hanging on my classroom wall!)  Or you can read the official White House blog post on the event, or visit whitehouse.gov/maker-faire to learn more.


Our Day at the White House

The excitement began exactly one week before the Maker Faire.  We received the email (below) 6 days prior to the event with scant details beyond we were invited and the event would occur sometime on Wednesday, June 18th.  In addition, we were asked not to discuss our participation until the morning of the event.  I've since learned this is how things roll with White House Events.

I was thrilled to be invited, but was surprised (OK, not really) that I could bring only one student from our collaborative team.  Luckily, due to a last minute cancellation, we were able to bring a second student!  Though many students contributed to this day (as discussed in the acknowledgments above), Sam and Jane have worked tirelessly to develop the project and share what we've learned with a broader community, so it was pretty clear that they would be selected as our representatives.

Two days before the Faire, we received clarification that as "honored makers" we were able to attend the event, but we would not be presenting our project. Well, that certainly made packing easier! 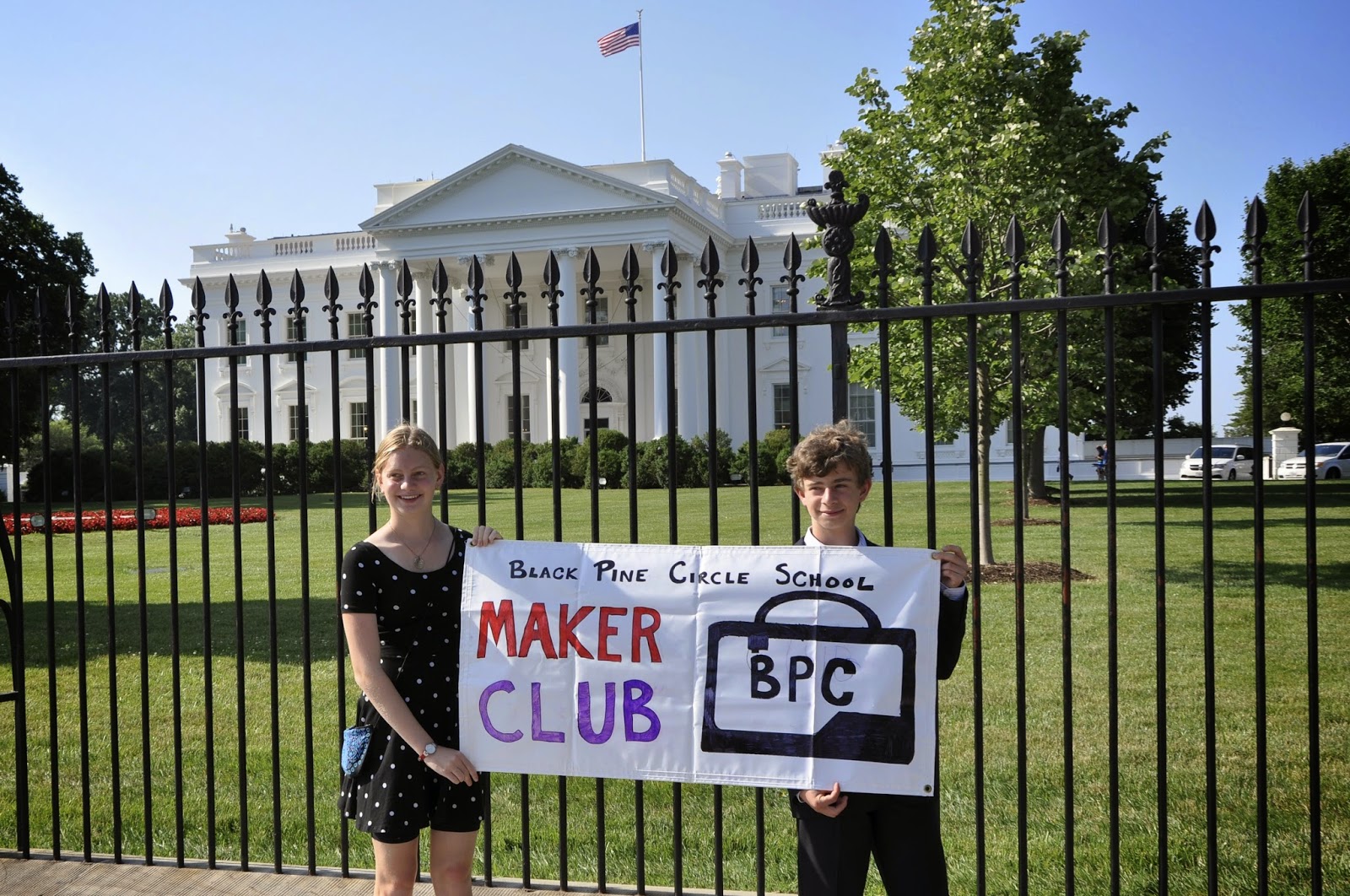 The connections began from the minute we stepped in line for the event.  One of the first people we saw was Avi Reichental, President and Chief Executive Officer of 3D Systems.  The kids introduced themselves, thanked him for our Cube printer, and shared our project. We also met the CEO of Trimble, the company that purchased Google SketchUp.
There were many steps through security to enter the event.  My personal favorite was the portable where we each had to walk through and be sniffed by working dogs!

Once inside, we were thrilled to see local makers David Lang (Zero to Maker (Love this book!); Open ROV) and Eric Stackpole (Open ROV).  These gentlemen have been generous in letting our Maker Club come and visit their space in Berkeley. We also excited for BPC to team up with these guys and host a screening of maker: A documentary of the maker movement at our school in the fall of 2014!

Soon after, we bumped into Caine, of Caine's Arcade, who inspired our very own cardboard arcade at BPC in which we combined old school materials (cardboard and duct tape) with some newer technology (MaKey MaKey and Scratch). It was cool to see so many kids at the Maker Faire.  We also chatted briefly with both "Super Awesome" Sylvia and Shubham Banarjee, creator of the "Braigo," a Lego Braille printer.
If you have never seen the video Caine's Arcade , please take 10 minutes and watch it now.


There were about 30 makers set up throughout the White House's east wing.  Some of our favorites included MaKey MaKey, Squishy Circuits, the crowd-pleasing Robotic Giraffe, and LittleBits.

We spent a lot of time at the 3D Systems booth.  One of my favorite moments was when I turned around to see Sam chatting with Will.i.am about our project. (Will.i.am was recently appointed Chief Creative Officer for 3D Systems.  He actually does all sorts of impressive philanthropic work.)  The best part is that Sam did not recognize him as a famous musician, while I was trying to get past "OMG - Will.i.am is checking out our 3D printed Mentos shell!) 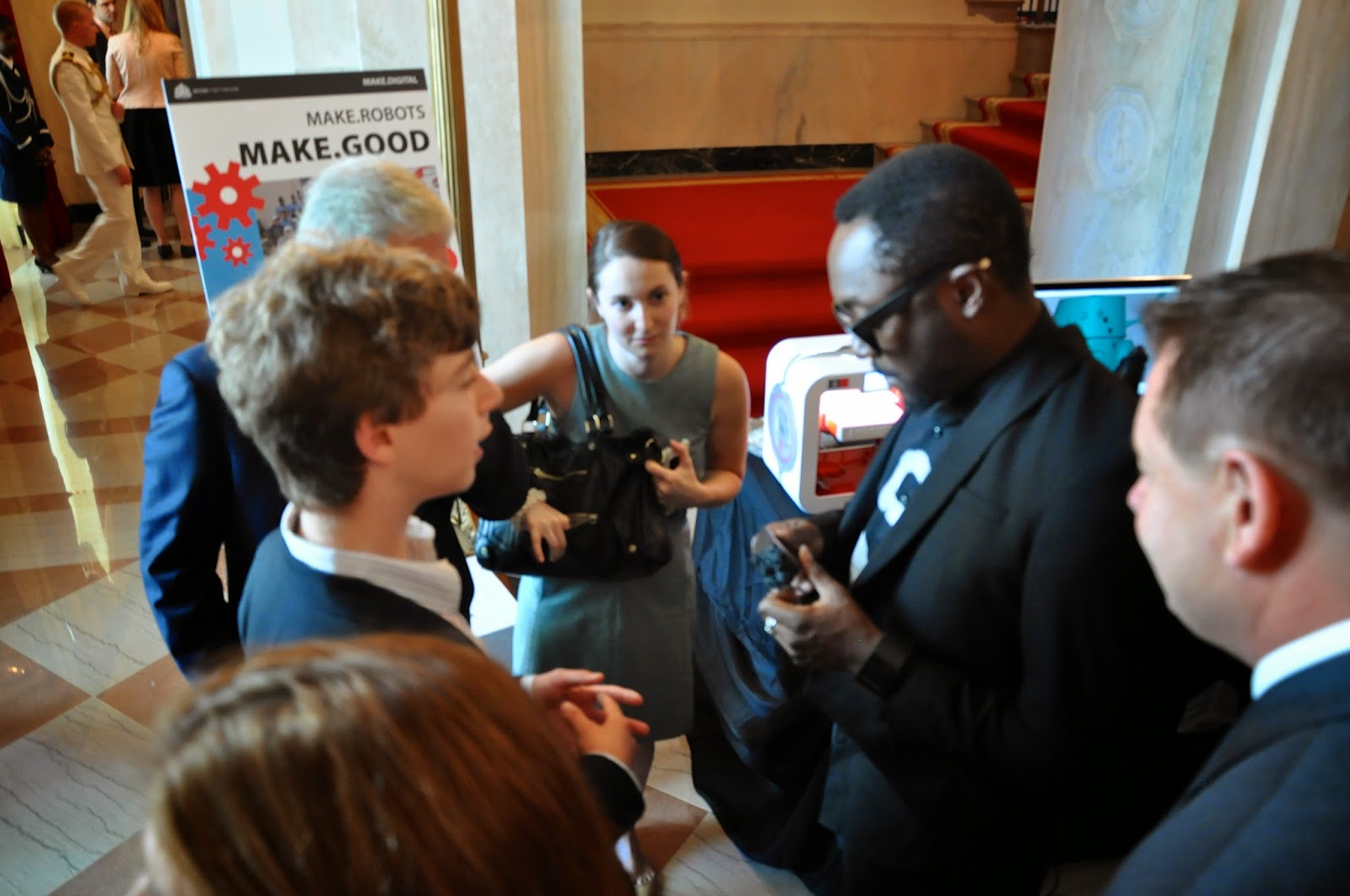 Finally, we spent some time talking scanning with Joshua from 3D Systems about scanning.


We also were able to visit with Other Mill, who we first met at the San Mateo maker faire and learned this week is based out of San Francisco!

Here is a list of all the makers who were invited and an InformationWeek article highlighting 10 of the coolest inventions there! :)

Of course, a major highlight of the day was being able to hear President Obama speak. We were pretty close (this is a picture taken from our seats!)  Fun fact: Obama is the first president to be scanned and 3D printed! 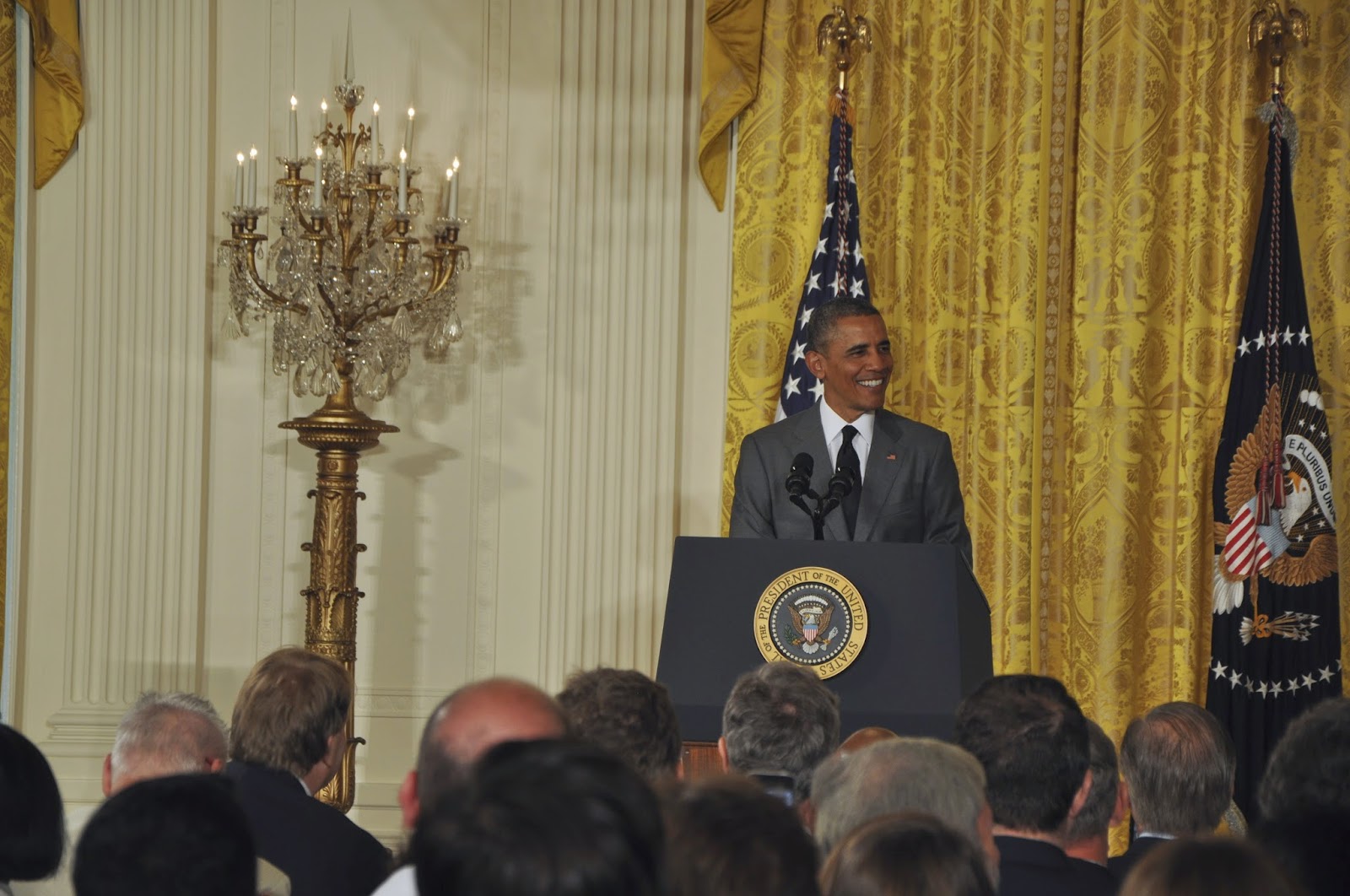 Here are some of my favorite makers and their projects, as described on the official attendee list.

Hannah Chung and Aaron Horowitz created Jerry the Bear, a best friend for kids with type 1 diabetes that helps them master their medical procedures through play. 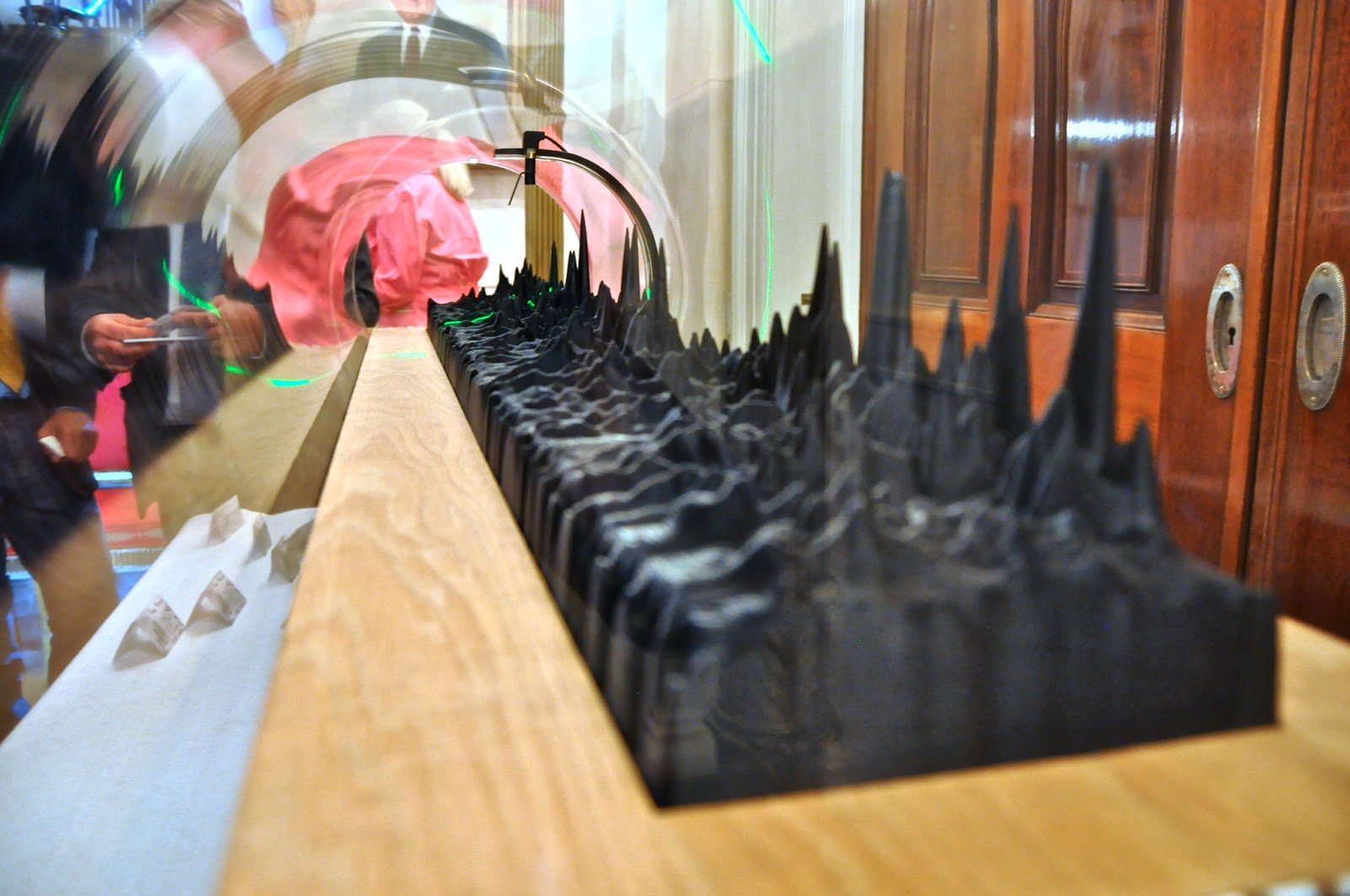 After hearing President Barack Obama’s State of the Union address on February 12, 2013, French artist and designer Gilles Azzaro was inspired to create a 3D-printed art piece based on the President’s message about the importance of additive manufacturing and his call to action to create a network of National Manufacturing Innovation Institutes. Azzaro developed his own program to transform the audio recording of the State of the Union address into a format that could be 3D printed. The 3D printed portion of the art piece took a total of 350 hours to build. The result is an artful and tangible rendering that synchronizes the audio of the speech with a laser that travels across the sculpture.

Miguel Valenzuela, who is originally from California but now lives in Norway, was asked by his two young daughters to create a pancake machine out of LEGOs—a request he just couldn’t turn down. When Miguel and his family debuted the invention at the 2012 World Maker Faire in New York City, it instantly became a crowd favorite. Over the last couple of years, Miguel has continued to improve the design and functionality of the PancakeBot, releasing the newest version earlier this year.
Another fantastic maker (not pictured) was Hahna Alexander from Pittsburgh, PA.

Hahna is the co-founder and CTO of SolePower, an innovative company known for a shoe insole that charges portable electronics by walking. The device branded “EnSole” works by generating power in the heel with each step and storing power in a Power Pack holstered on the shoelaces. The Power Pack can be removed at any time to charge a phone or any other electronic device using a USB port. SolePower’s 3-year project has won the team the 2014 Popular Science Invention of the Year award as well as the Africa Energy Award for Innovator of the Year. The SolePower team looks forward to bringing easy-access energy to shoes all over the world, one step at a time.

While we were in DC, we had the opportunity to tour a few other places.  A former student of a parent of my current student (got that?) had an internship and was able to swing a partial tour of the West Wing.

Finally, on Thursday just hours before our flight took off, we toured the National Defense University and learned about this fascinating learning institution which "supports the joint warfighter by providing rigorous Joint Professional Military Education to members of the U.S. Armed Forces and select others in order to develop leaders that have the ability to operate and creatively think in an unpredictable and complex world." (quote from their mission statement)  Someone described it as "social defense" or the capital of people.  Countries send their up and coming military leaders to study together.

One unexpected highlight of the trip was a meet and greet with NDU president Major General Gregg F. Martin, who invited us to listen in on a briefing on the current state of Iraq.  He further surprised us by saying, as we walked in the door, "why don't you kids get us started by summarizing your project in one minute to these folks?"  A formidable challenge to be sure in a room full of adults, many in military uniform!  But Sam & Jane did us proud! :) 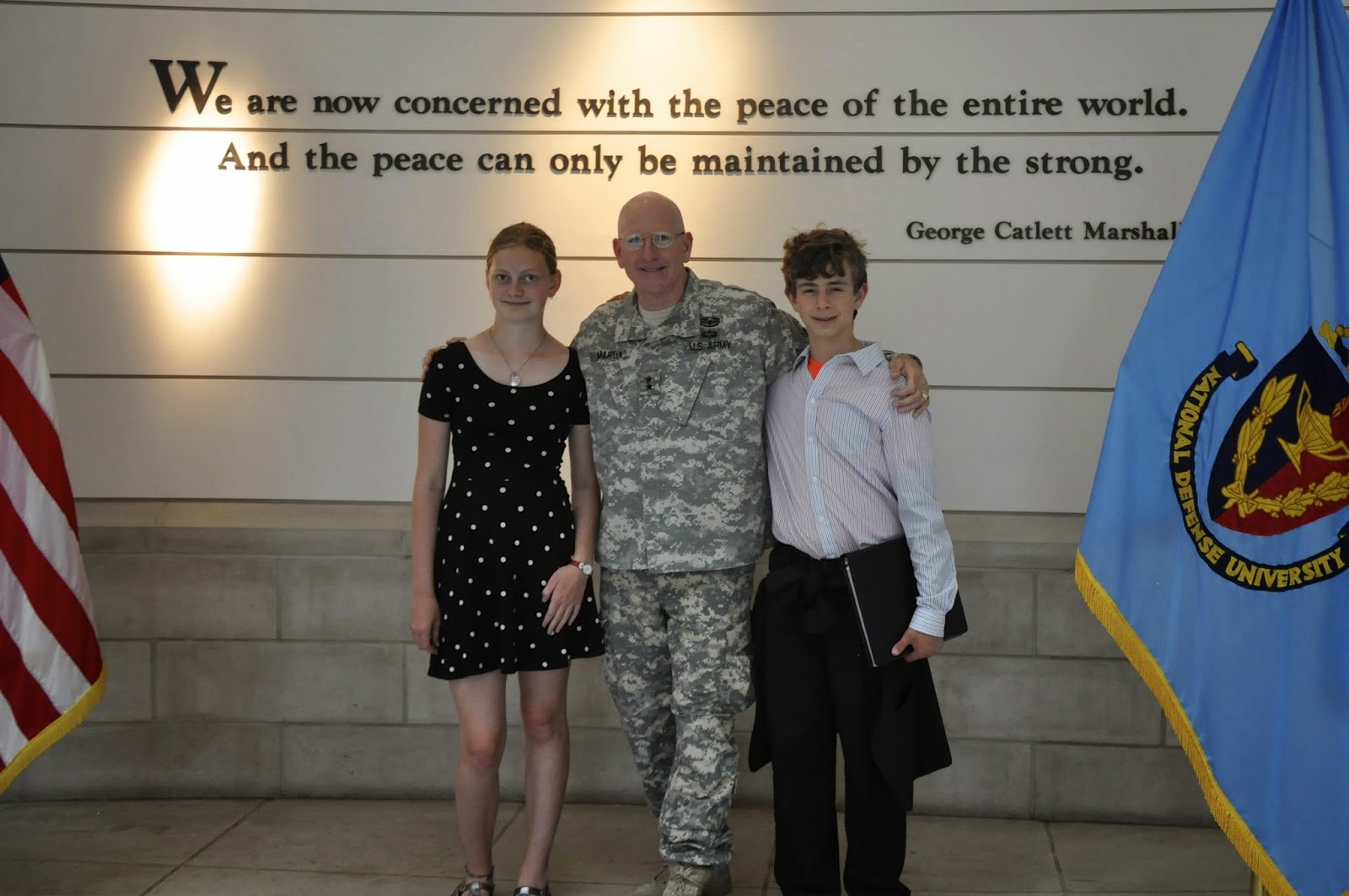 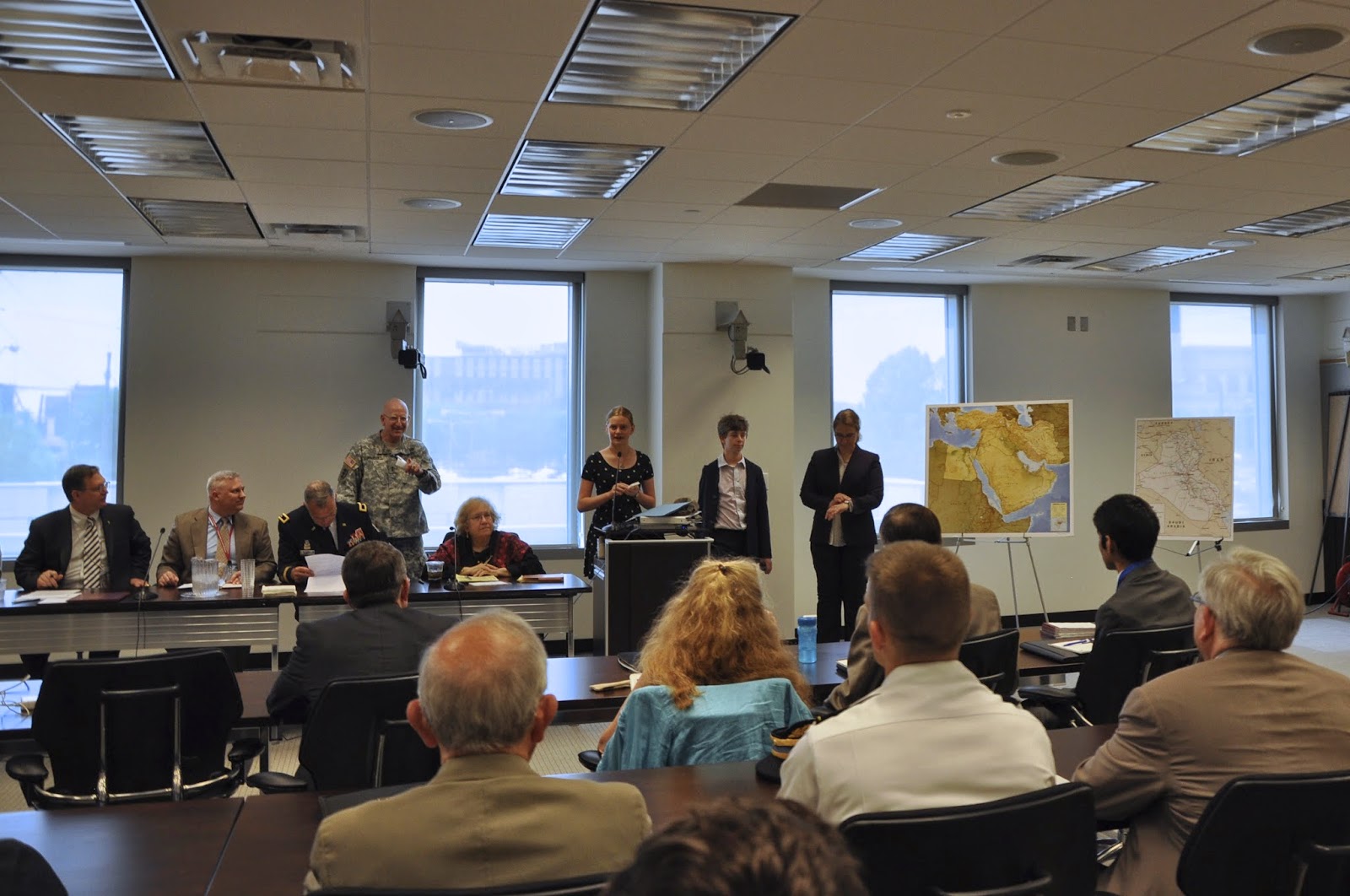 It's been interesting to read other people's experiences at the White House Maker Faire.  Here are some blog posts by folks from The Grommet,  La Petite Maison, more?  Also some articles discussing the focus on 3D printing.

Email ThisBlogThis!Share to TwitterShare to FacebookShare to Pinterest
Labels: Excursions, Our BPC Story