Today we got a package and are proud to introduce to you, the Cetus 3D! The Cetus is a printer from Teirtime (the same parent company of Afinia). 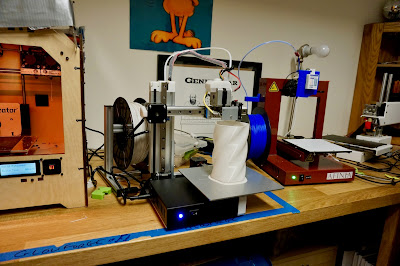 The Cetus is a pretty new 3D printer that was on Kickstarter for pre-order late last year and was meant to deliver this January. We bought this directly from Cetus and it came in about 2 weeks from China. As you can see, it does require some assembly, but it is not too bad. 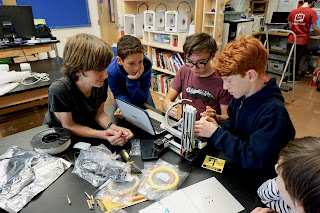 The Cetus seems like an amazing deal for $300. It removes all of the flashy boxes and accessories most of the new 3d printers have today, and gives you a great experience. With linear guide rails, a 7 inch cubed build area, wifi printing ability, and an easy to use software, it even came with a nozzle unclogger and snippers to cut filament and such, what's not to love? Well, not much.

The only bad thing is the Z axis is not supported without power. This means when you turn off the printer when it is at the top (or its idling position) the printer head will glide down and rest into the build plate. You can print a clip or lever to hold it in place and stop it from doing that so its an easy fix.


I was also surprised when I printed an overhang stress test and it didn't start stringing until about 60˚, and even after that it still printed with very very minimal strings (even to 90 degrees!!).

I was amazed, I then loaded up the Make Benchy boat stress test. Once again I was astonished at the quality of the overhangs and pure detail around every corner. Comparing it to the Afinia, the Cetus lacks a heated bed (and that means no ABS but it doesn't matter anyways because our classroom is trying to move away from ABS) and currently in their shop is a beta heated bed anyways so if you really wanted it you could get it. On the flipside, the Cetus has a much larger bed and is also quite a bit cheaper.

I'm excited to continue using this 3d printer as it is by far my favorite.

Posted by Anonymous at 10:32 AM No comments:

Email ThisBlogThis!Share to TwitterShare to FacebookShare to Pinterest
Labels: 3D_printer, Hardware and Materials

A Theremin in our Classroom

.... because every middle school classroom needs more things in it that make noise.

In all seriousness, I am proud of my students for building this theremin from a kit, then troubleshooting it until it actually worked. Now, they are experimenting with the goal of eventually producing music, instead of sounds resembling the screeching of a tortured cat.  You can read a little about the theremin's interesting history here, or watch the video about the science of how it works below: