Four our (non-competitive) school science fair, I give my students a lot of freedom in choosing a topic that is personally interesting to them.  Many groups choose to do a traditional controlled experiment, but I always allow for more engineering-type projects as well.  This year, we had 4 (out of 31) projects organically incorporate a 3D printer as a tool in their projects. 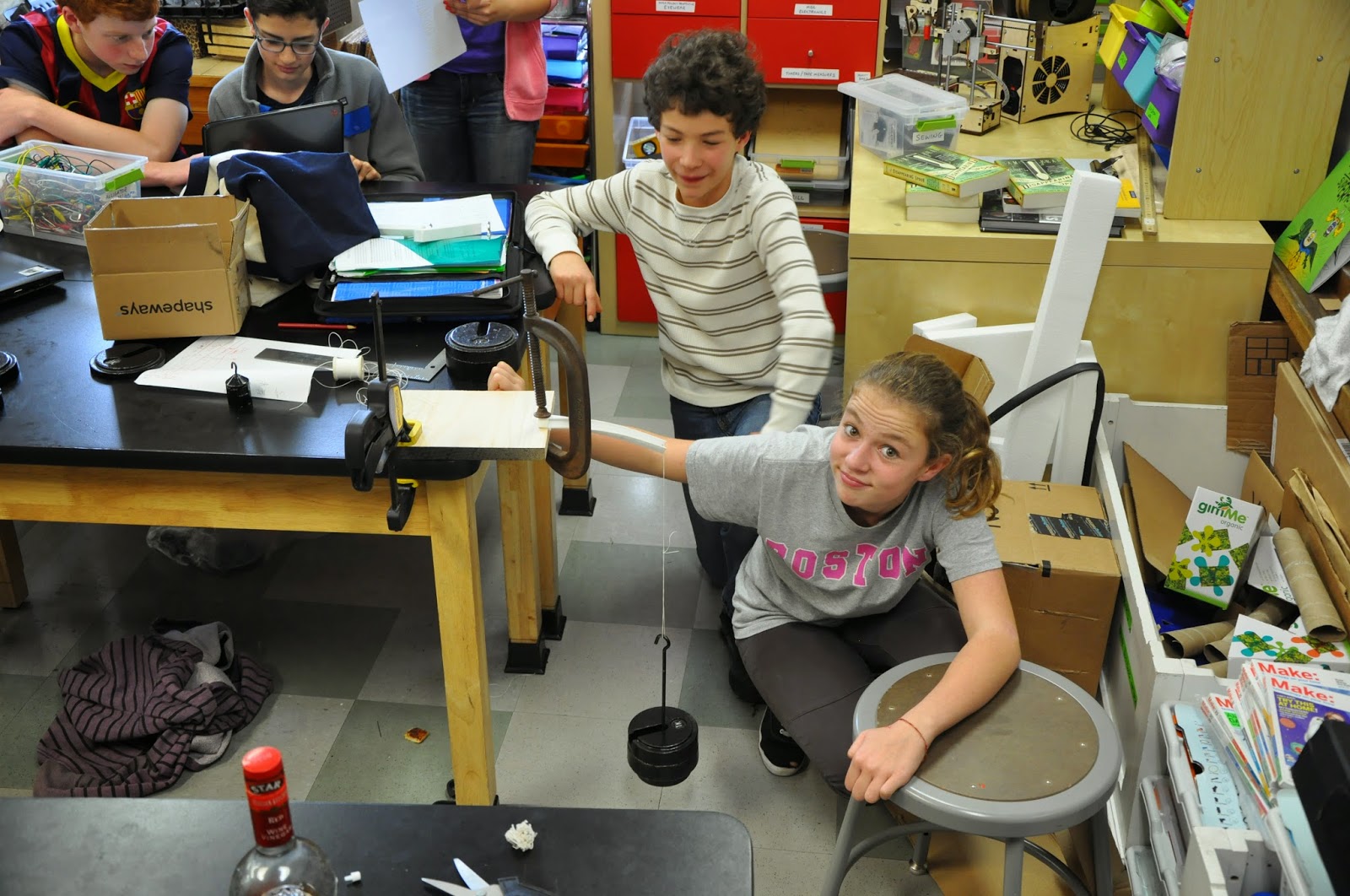 Here are their project abstracts:


Experiment Title: What is the strongest type of beam?

Abstract :   We conducted an experiment to determine the strongest shape of beam with the same cross sectional area. We first designing the beams in Solidworks, making sure that they all had the same cross-sectional area, then we had them 3D printed. Then we took two clamps, clamped one of the beams to the piece of wood and put weight on the beam. We found that the I-beam was the strongest by 4.23mm per kilogram. This is true because the I-beam has the highest moment of inertia, a measurement of how much of the area is farthest away from the central axis. Engineers use I-beams all the time to create stronger, cheaper buildings.
Click here to download the STL's from their project.

Abstract: We (Eli M. and Alex B.) attempted to build a LibraryBox. A LibraryBox is a digital file distribution system originally designed by Jason Griffey, who based it on a previous concept called the PirateBox. It has an advantage over conventional cloud storage systems (such as Google Drive) because it is usable in areas that do not have access to the Internet. Devices in the general area of the Box can connect to it and download various files from it, such as music or documents. We also designed and 3D printed a case for our LibraryBox using Tinkercad. We successfully designed the case, but the fate of the Box remains to be seen.

Abstract: We used a 3D printer to make a 3D printed ice cream ball, which would hopefully be able to actually make good ice cream. We tried to use a lot of different ways to get a good print of the ice cream ball. We used a Kinect to try to take a good scan of the ice cream ball. It failed because the Kinect couldn’t get most of the angles, so it ended up with lots of holes. Then we tried to use Tinkercad, but we couldn’t get an amazing product. We used 123D next. We had to take lots of pictures to get a scan. We didn’t like it again, so we knew that we had to go back to Tinkercad. We worked on making the ice cream ball able to be printed out. Our first scan didn’t go super well because one side was thinner than the other. Then we ran out of time to make a different scan.  The importance of our project is to create a cheaper way to make ice cream if you already have a 3D printer & a lot of free time.

Abstract: We tried to make a 3D printed quadcopter with Arduino. We haven’t gotten the quadcopter to fly yet, but we are hopeful.  We printed all the parts successfully after quite a few failures and delays.  We used 3 different printers, including the printer at the ALS (a government facility). The Arduino code and Aeroquad software wasn’t working correctly because the versions of each software weren’t compatible, which gave us a whole host of problems to solve. Learning about this is important to science and 3D printing because it shows how easily things are to customize and print with 3D printers.
Posted by C. Mytko at 1:31 PM