This weekend, I got myself an expo pass to the 3D Printer World Expo in Seattle, WA.

Now I've got our eye on this SLA machine, Droplit, an entirely open source resin-based stereolithography (SLA) printer soon to be offered by SeeMeCNC!  It will come as a kit, although all the pieces (save for that one metal cylinder shape) are open source!  The UV source comes from a DLP projector from which you will need to remove the UV filter.  To cure the resin?  A UV nail lamp from Walmart!  Now, THAT's our kind of budget.  You can read more about the Droplit on this 3Dprint.com post. 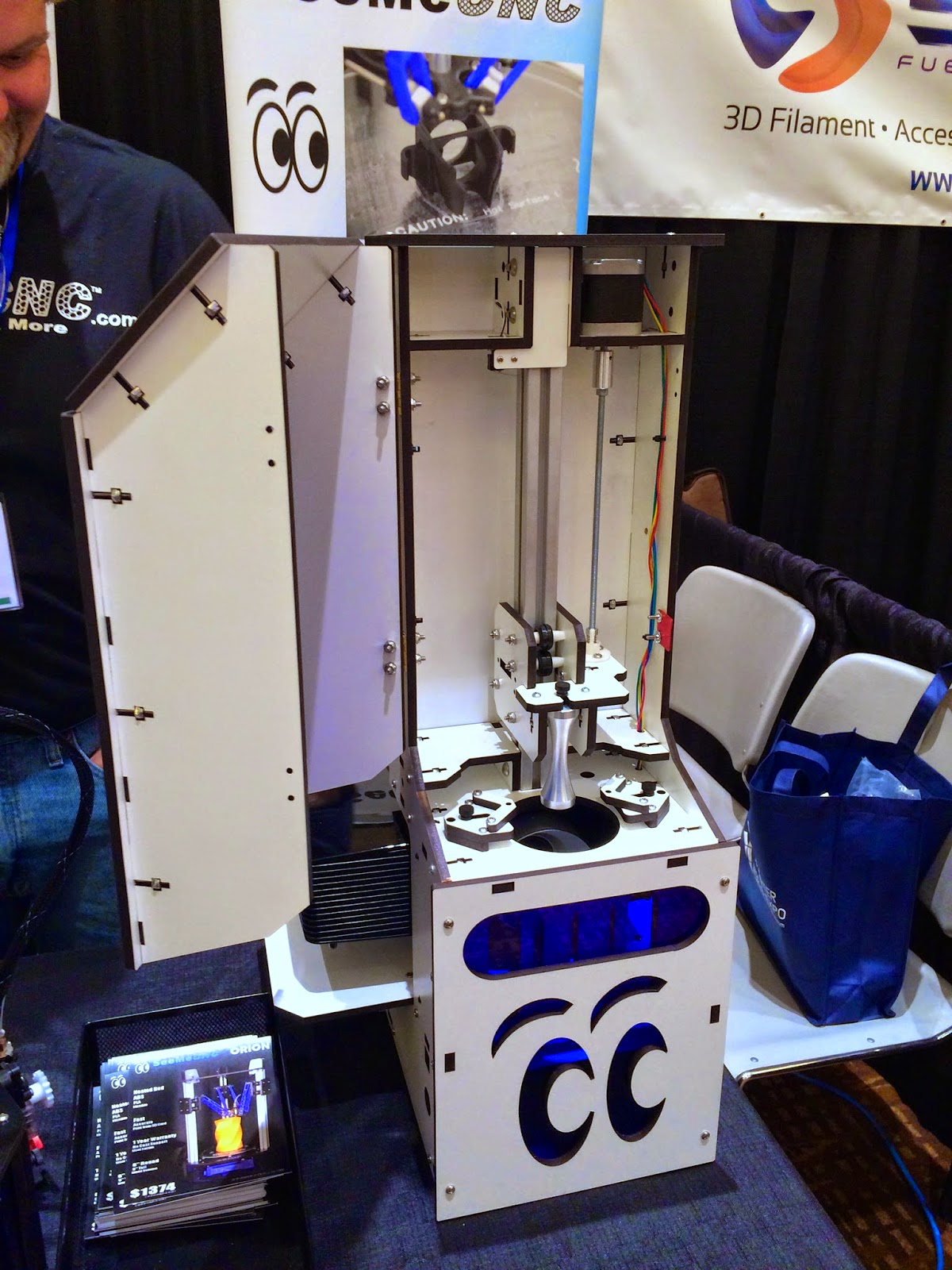 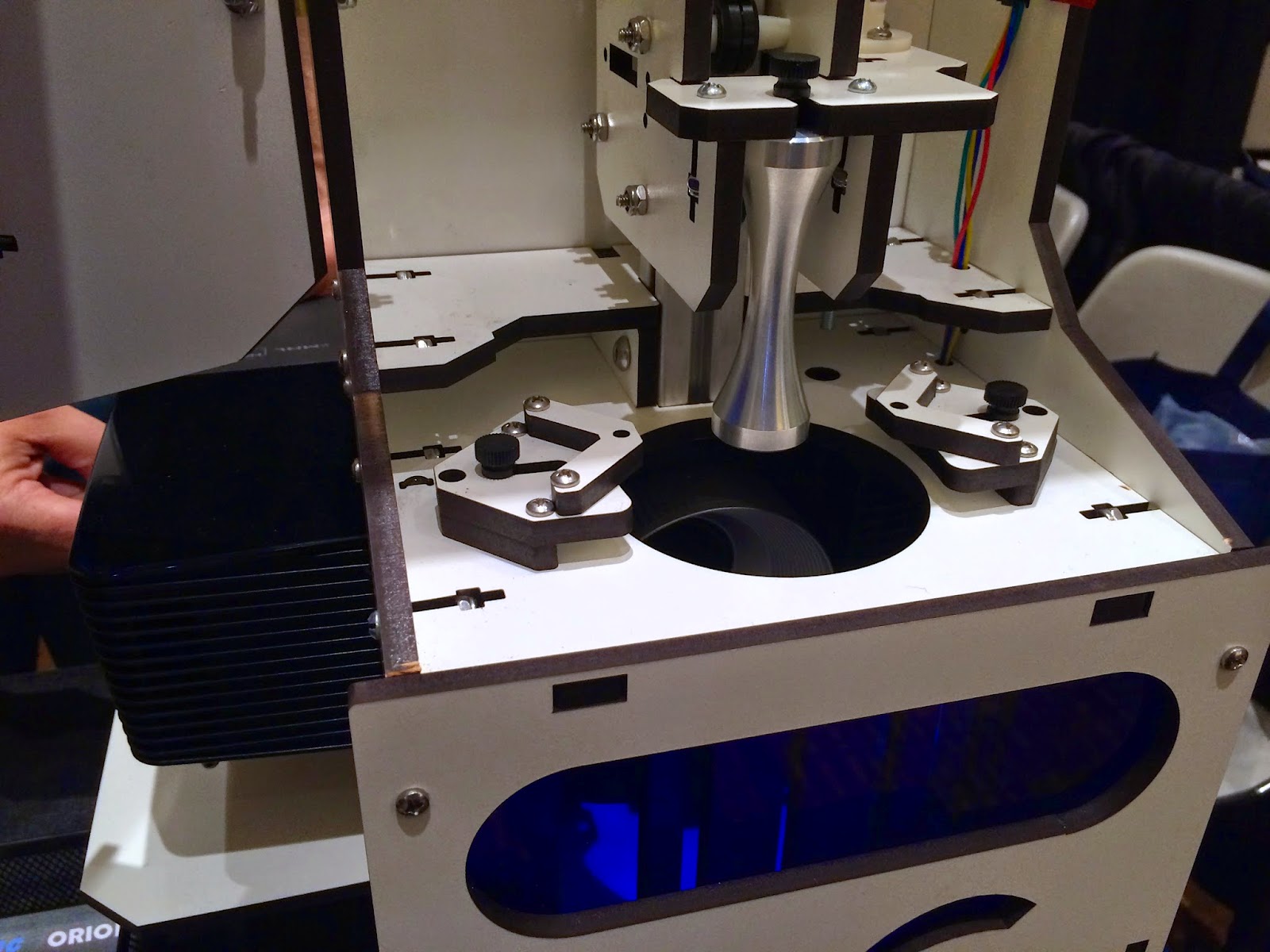 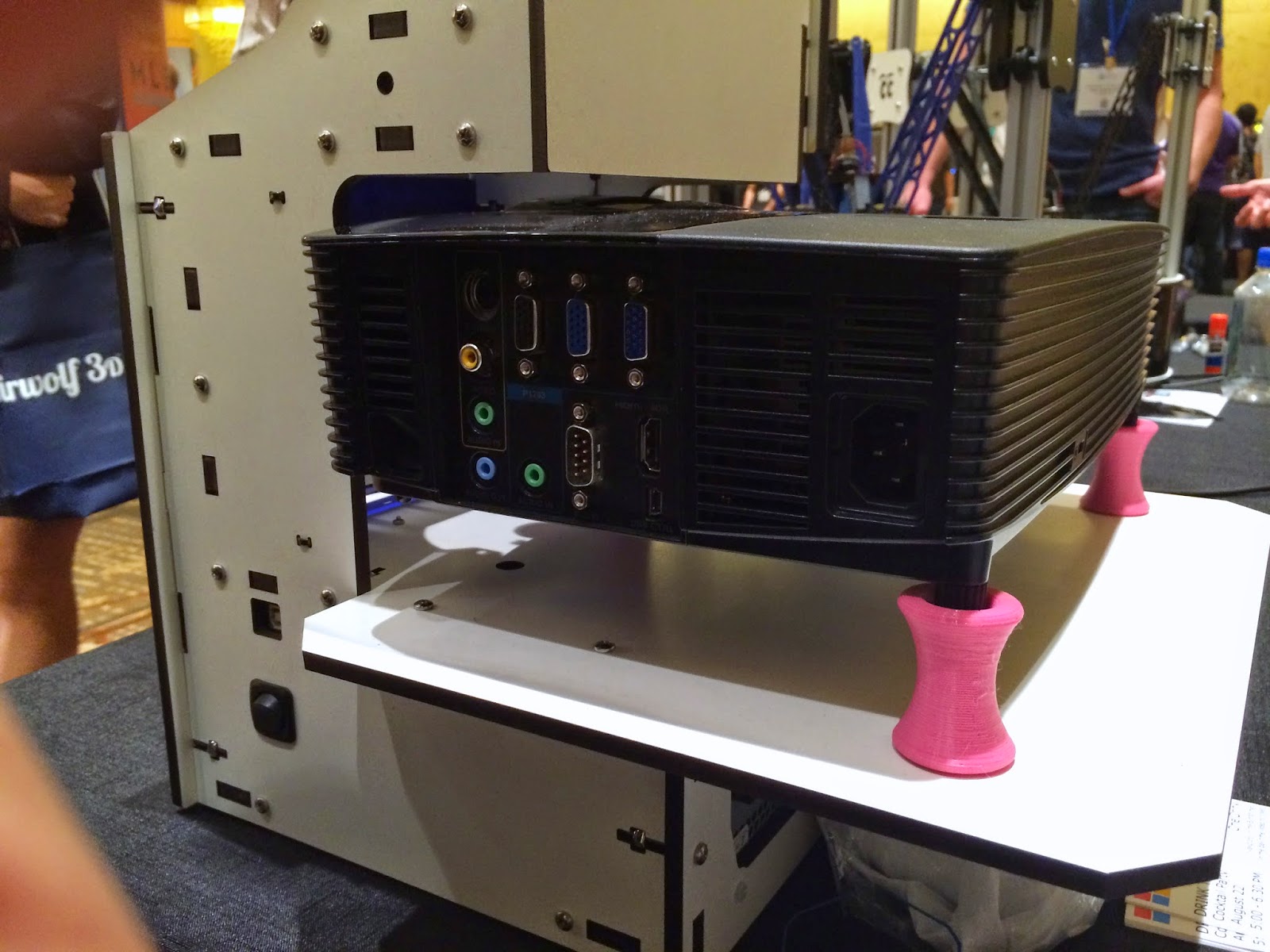 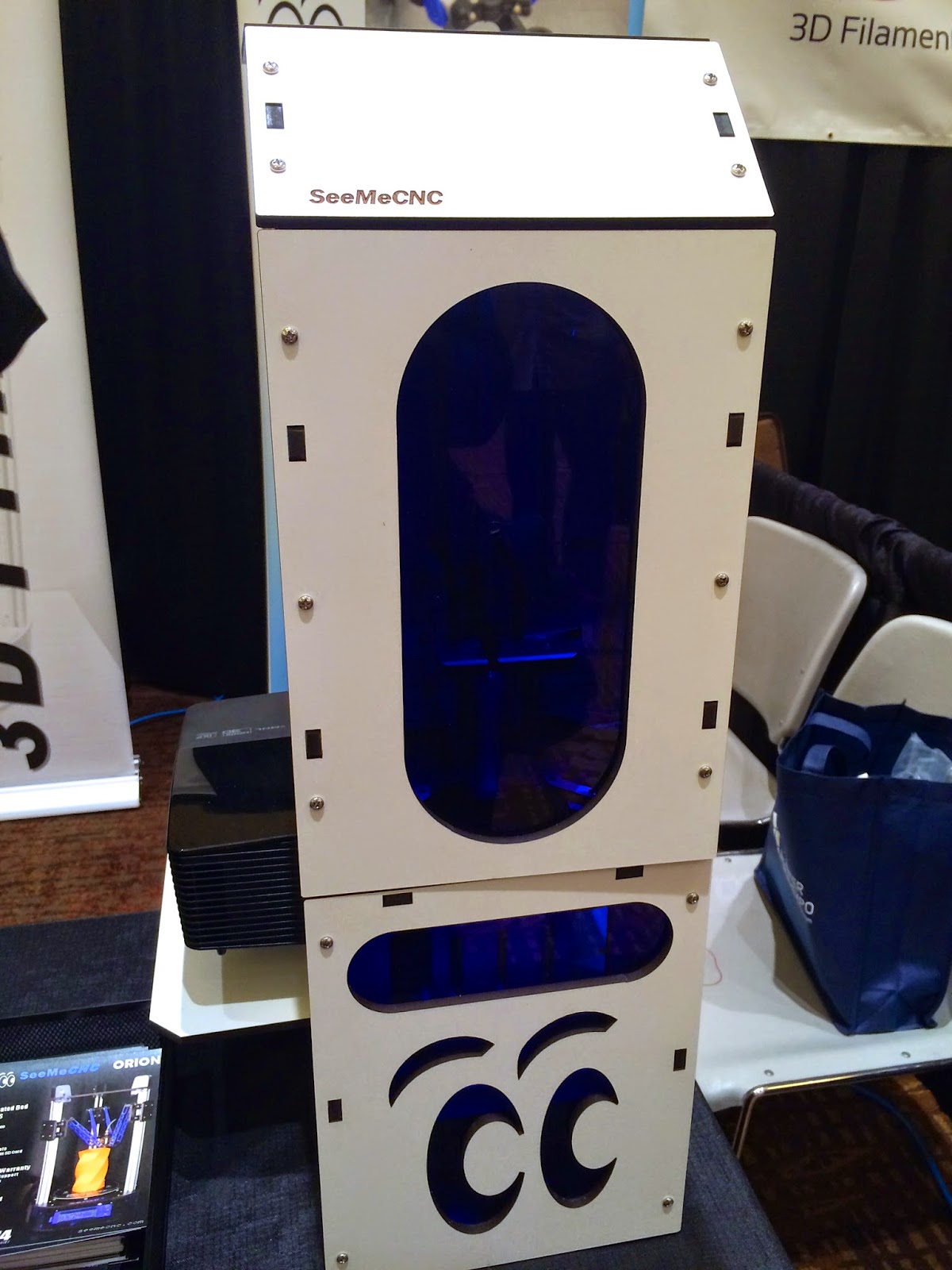 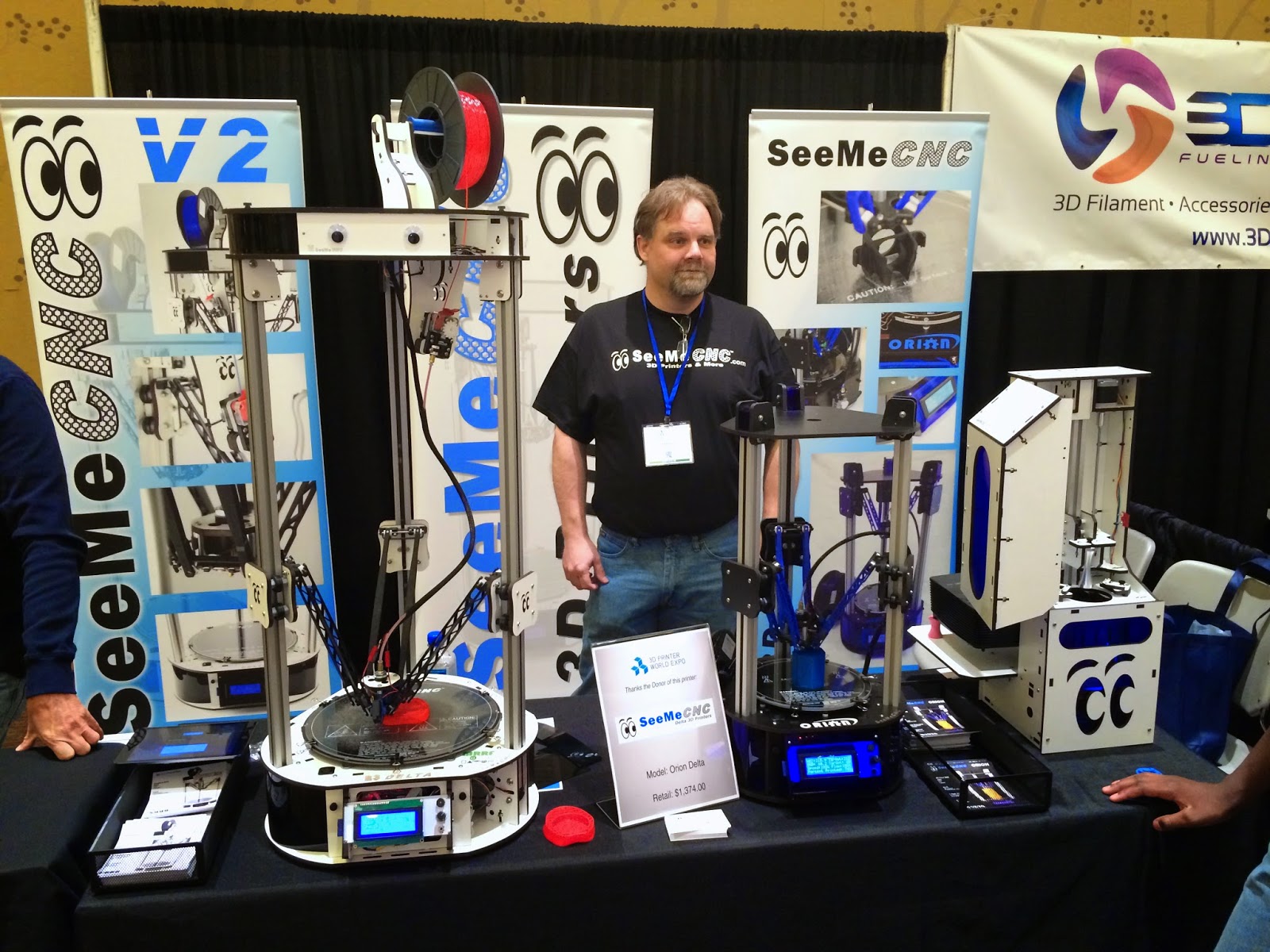 I also got the chance to chat with the Matter and Form folks.  We will be receiving ours any day now! 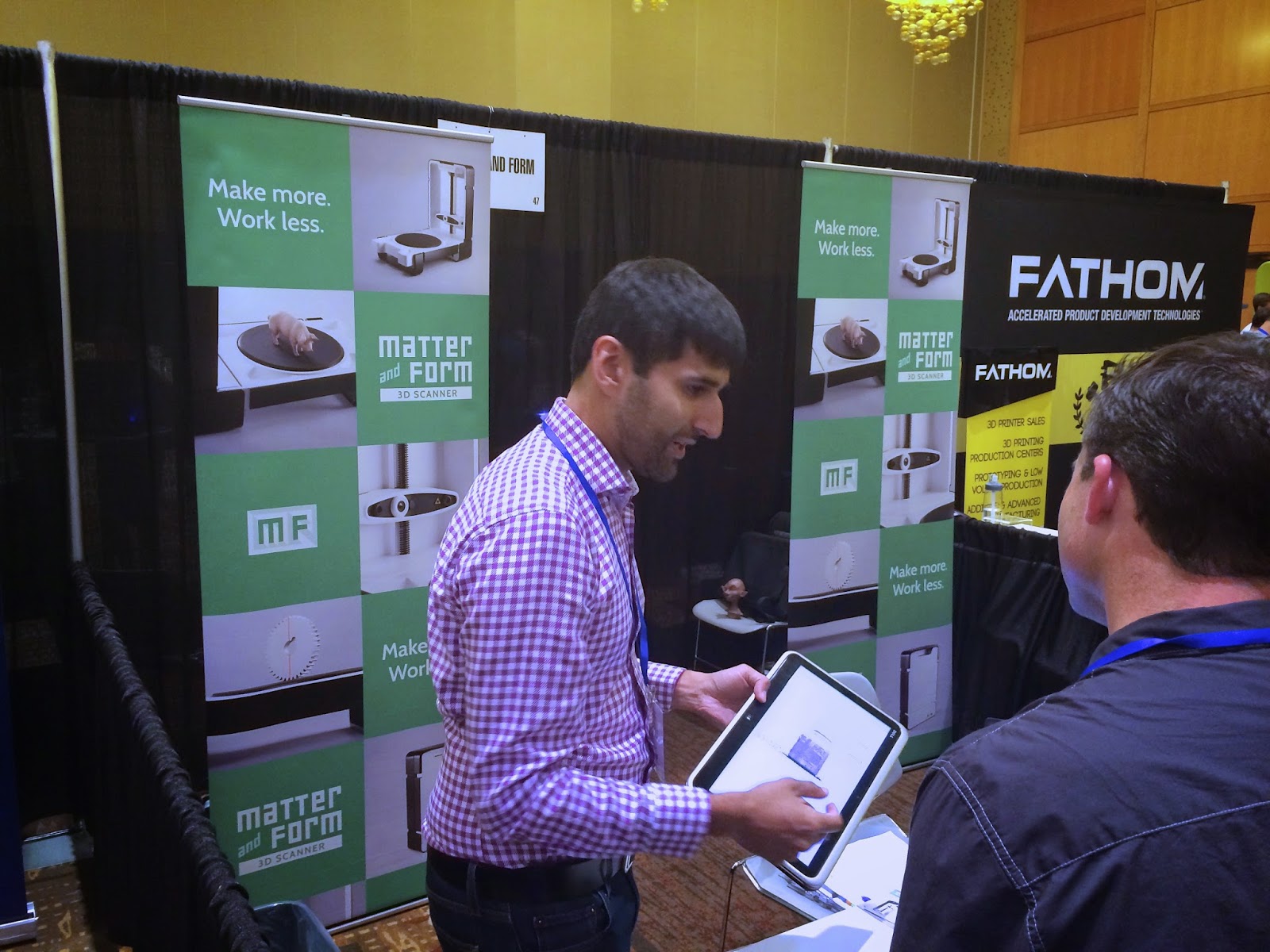 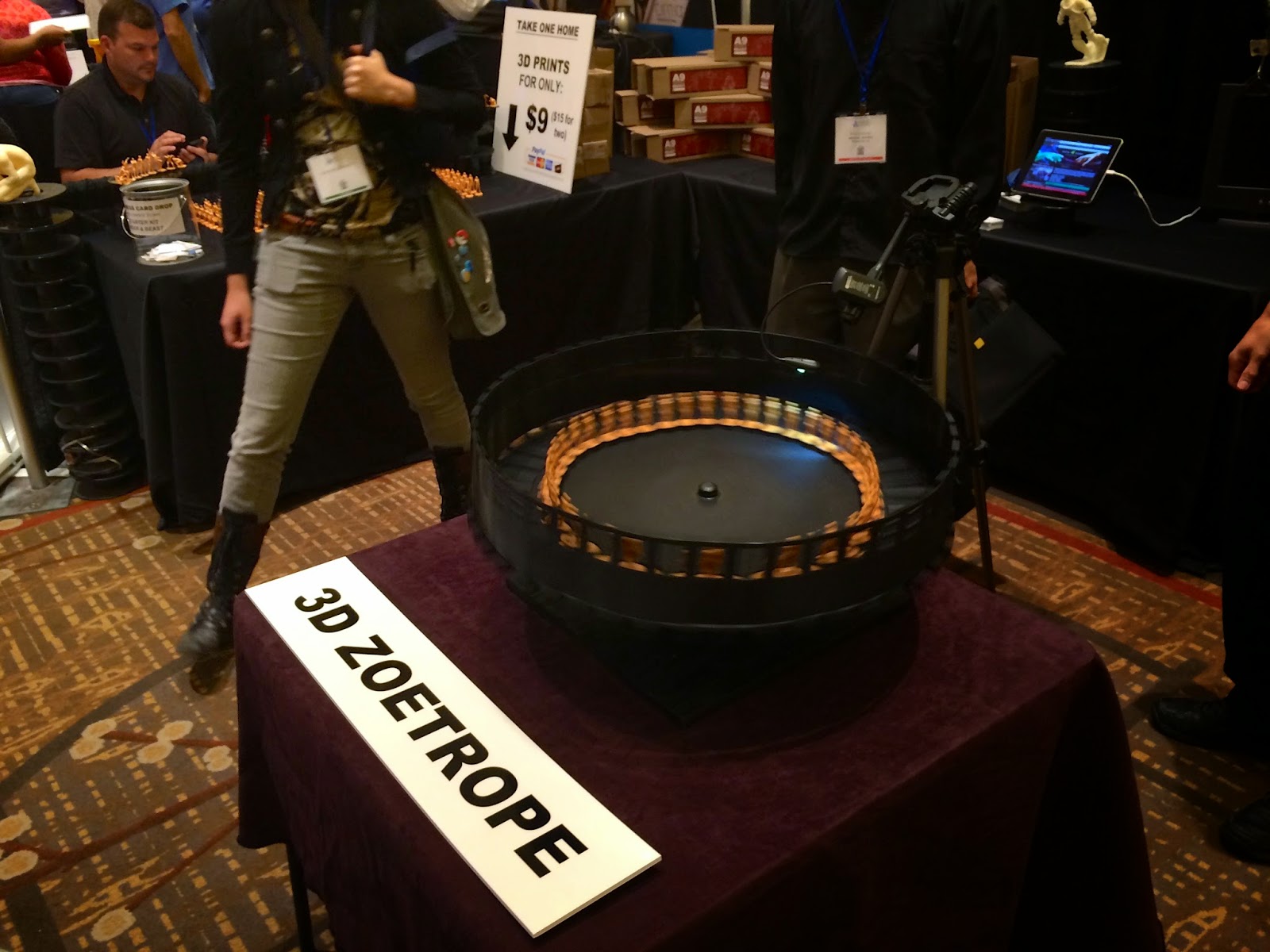 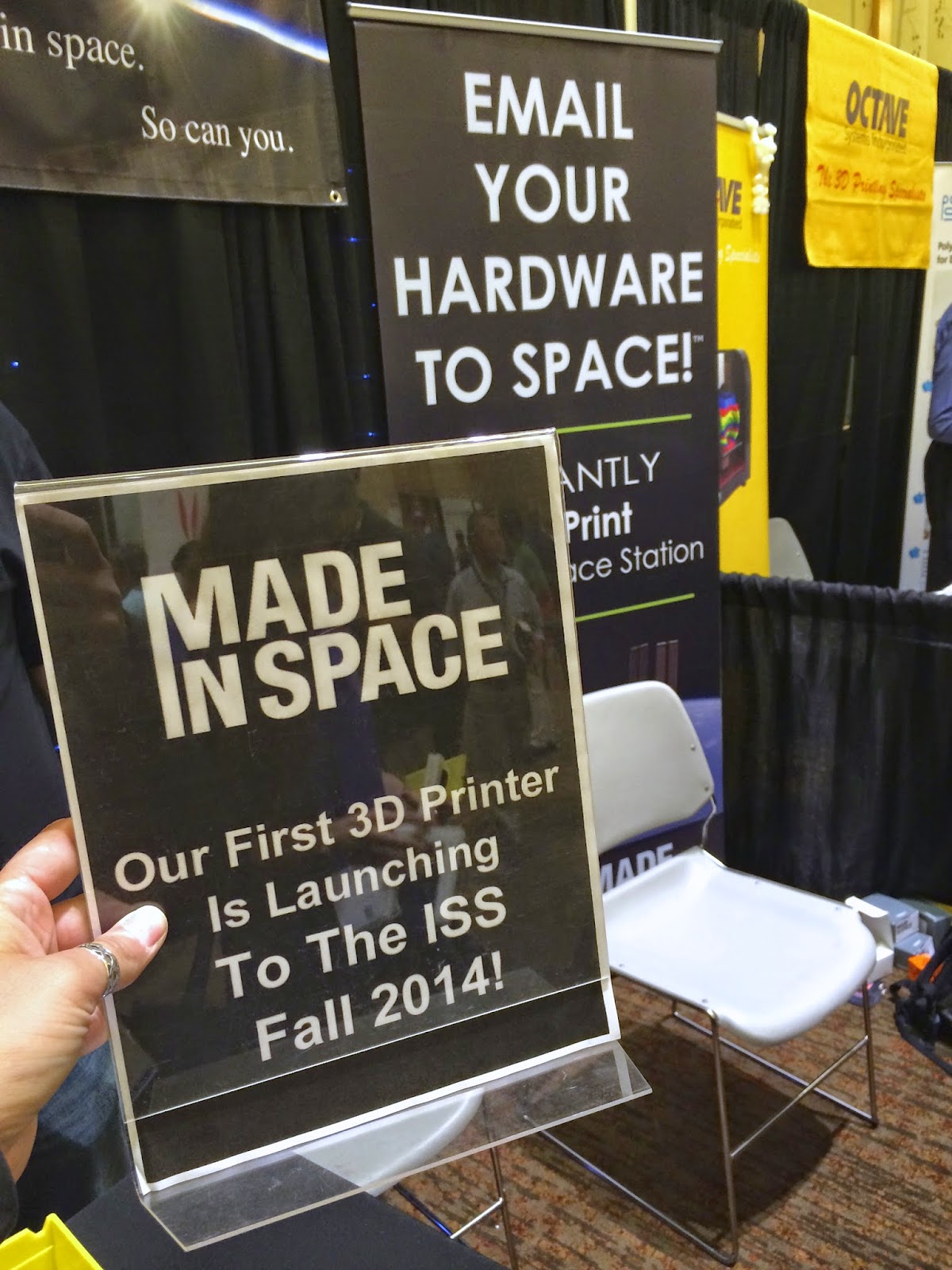 Finally, I wanted to acknowledge the Made in Space project.  It's pretty incredible - they plan to send their first printers into microgravity on September 21! Eventually, they hope to use moon dirt as their "filament" to build what they will need.
Posted by C. Mytko at 12:52 PM No comments:

Email ThisBlogThis!Share to TwitterShare to FacebookShare to Pinterest
Labels: 3D-Events, Hardware and Materials

Buttercup the Duck Gets a New "Swim Foot"!

This is a fabulous, heartwarming application of 3D printing.   We've been following Buttercup's story for a while now, and this week there was announced an exciting new development!  Buttercup's "dad," Mike, from the Feathered Angels Waterfowl Sanctuary has developed a new "swim foot."  This foot has little trap doors that open when he moves his foot forward to allow water to pass through, then close when he kicks to maximize thrust.  Brilliant!


You can read more (and see more pictures!) on Buttercup's Facebook page! 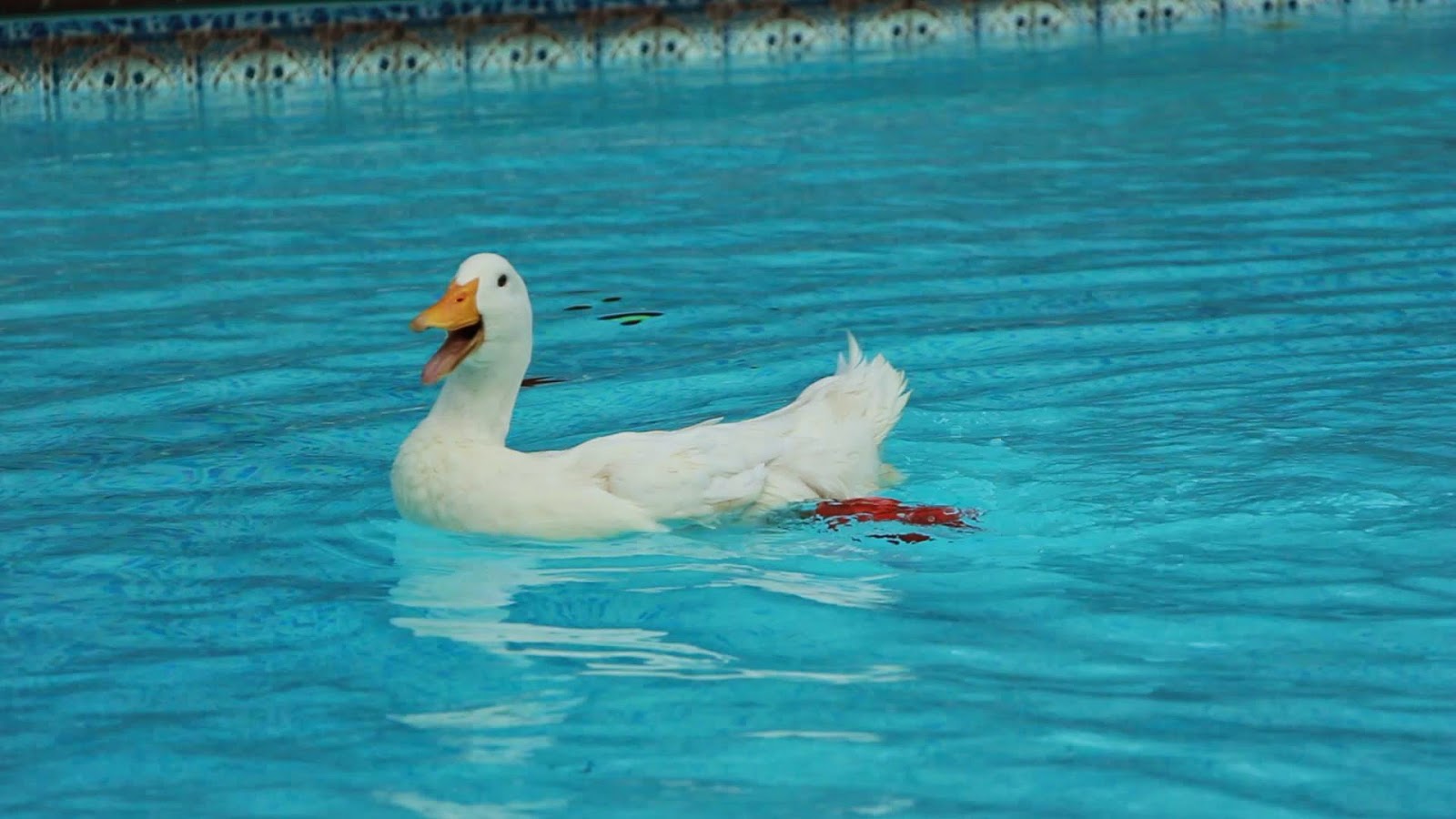 A new 3D printing company, Sculptify is taking the next 3D printing leap  replaces traditional (and expensive) plastic filament with pellets.  These ingenious pellets would significantly reduce the cost of home 3D printing.  (According to Sculptify, a 2-pound bag of pellet costs around $18, while a 2.2-pound spool costs roughly $48.)

Sculptify is not the first manufacture to use pellets, German manufacturing company ARBURG has an industrial 3D printer, the Freeformer, however Sculptify is the first hobbyist-level pellet based 3D printer. Here is Sculptify's Kickstarter video.

The process works by having the plastic pellets go into a  turning screw, then go down the screw while being heated, turning it into one tube of semi-molten plastic.  Sounds familiar, right?


There have been other companies toying with the idea of using pellets for 3D printing, including a couple of products that promise to turn your pellets INTO filament.  Products like the Filabot (2012), Filastruder (2013), and Strooder (2014).  Other companies, like Colorfabb, are beginning to offer plastic in its less expensive pellet form.

How the Form 1+ Works from Formlabs

I recently had the chance to visit and tour Formlabs, where I saw firsthand some of their early prototypes and new 3D printers.

The Form 1 and Form 1+ are great 3D printers. The Form 1+ is the new version of the Form 1. It comes with many improvements, such as faster print time and more accuracy. They are both SLA (Stereolithography) printers. 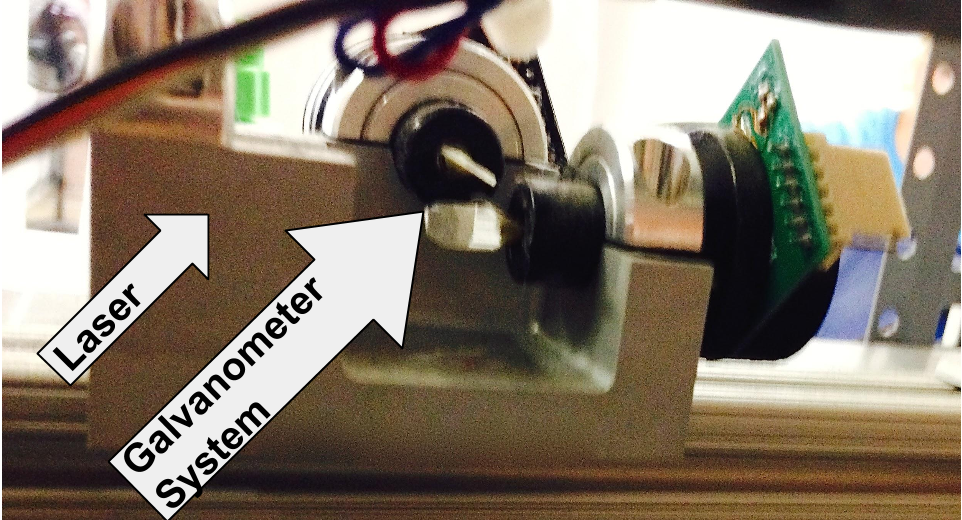 The Form 1 and Form 1+ use a galvanometer system (two mirrors) to focus and direct the laser. Then the laser gets reflected off a mirror to the build plate. The laser fuses the resin together.

After each layer is printed, a motor moves the build platform up. Unlike fused deposition modeling, the Form 1 and Form 1+ have the build plate on the top instead of the bottom.

The Form 1 and Form 1+ offer significant improvements over FDM printers. When each layer is created, the way the material is bonded together ensures there will be no layer lines, making the print look significantly better. They also offer much better resolution than any other consumer 3D printer.  The layer height can be from 25 to 100 microns. 100 microns is what most desktop 3D printers offer right now. The Form 1+ is up to 50% faster than the Form 1.  The Form 1+ is more expensive than most consumer 3D printers, costing $3,299, but the print quality makes it worth the price for those seeking extremely detailed products. The Form 1 and Form 1+ also require post processing that can take an extra 22 minutes using isopropyl alcohol (which should not be handled by kids). The Form 1+ has the best resolution and print quality of any current consumer 3D printer.

While at Formlabs, I had the chance to see many examples of models they had printed out with the Form 1+ and Form 1.  Among my favorites are a rook and an action figure with a 3D printed head. This action figure's head was scanned and then 3D printed. This rook is Formlabs' new take on the rook that comes with most 3D printers. Instead of bricks stacking up, it has a beautiful spiral and a very intricate staircase. US Government agencies such as NASA, The Smithsonian, and the NIH have started to create their own collections of 3D objects!

NASA's model collection is mostly contains models of their satellites however it also contains some of things like space suites, shuttles, and a martian crater. Unfortunately, most of these models are not printable. NASA has conveniently separated the printable models on this page.

The Smithsonian museum has also started uploading 3D models of items from their collection to their Smithonian X3D website. Though many of these models look amazing many also look unprintable so be warned before you try to print them.

The NIH has taken a different approach to 3D model collection by making a Thingiverse like website for medically accurate 3D models. As you might expect, many of these 3D models of proteins and cells are scientifically accurate but likely un-printable. (Especially on our classroom 3D printers.)

UPDATE 7/4/15:  There are more model repositories that have been brought to our attention.  Here is a running list:

Check out this video of Chuck Hull, winner of the European Inventor Award 2014.  (You can view videos of the other winners here.)  In this video, he describes his invention of the first SLA 3D printer in 1983!

Print Your Face in Mayonnaise 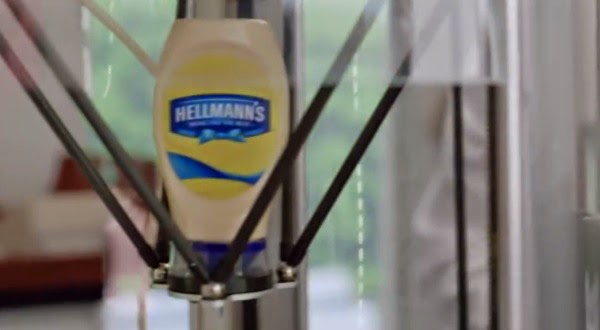 As part of their summer "Hellmann's Summer Hacks" campaign, Hellmann’s (yes, the mayonnaise company) released a video of it's 3D mayonnaise printer.  The printer is delta style (see image on right) and resides in a food truck.

The blogosphere is calling it a "mayo selfie" however it doesn't seem to strictly adhere to the requirement that you... umm... take the picture yourself? The "BBQ lab" takes your picture, uses some software, and then prints your face on your hamburger. In my cynicism, I might also argue that it is not necessarily 3D printing, since there is only one layer. It's more like a giant mayo Sketchy.

Although this certainly sounds like something the Bay Area would be into (though, do people eat mayo out here?), the promotion is currently being marketed in the United Kingdom.

You can watch the video below, or read this post about it.  Apparently, Hellmann's is not the first, nor will it be the last, company to jump on trendy 3D printing - Oreo has it's own 3D printing capabilities at SXSW earlier this year.

Email ThisBlogThis!Share to TwitterShare to FacebookShare to Pinterest
Labels: Misc

This summer, I returned to the Advanced Light Source (ALS) at Lawrence Berkeley National Labs to continue my work from last summer.  (Who would have guessed that a simple 2013 summer internship would have led to a successful student field experience, ribbons at the Maker Faire, and an invitation to the White House?!)

Anyway, last year we noticed that visitors to the ALS had the option of building their own model of the building:


Build your own ALS by constructing a papercraft version of the ALS. The 3-D model of the ALS can be made quickly with only Scotch tape and scissors, and when completed, the top tilts off to reveal the beamlines and accelerator under the dome. The model and instructions can be downloaded here; heavier paper (i.e., #80 or #100 paper) is needed to print pages 3-6 (the actual building parts). 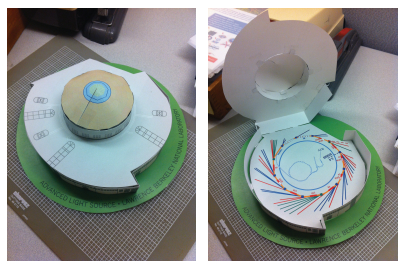 While the BPC Maker Club certainly appreciates the power of tape, cardboard and duct tape, we also love 3D printing! We wondered if any other light source had a 3D model.  We found one,  based on the Diamond Light Source near Oxford in the UK.  It is pictured below and the stl file can be downloaded here. 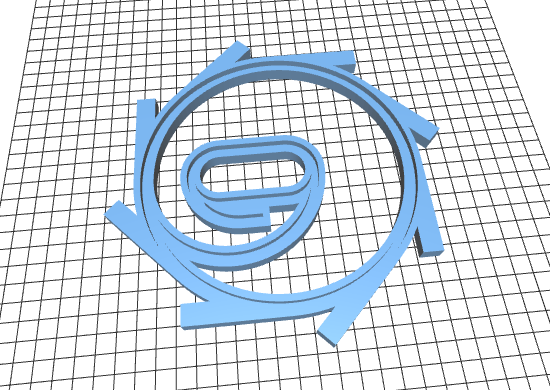 But that wasn't enough for us.  So, recently-graduated BPC alumnus Cole C took on the challenge of creating a 3D model of the ALS.   (It's worth checking out his other designs on Thingiverse, too!)  You can download the most recent file here.


You should feel free to download your own synchrotron model! :)