This is incredible.  Yahoo JAPAN has integrated the search function with a 3D printer and developed the “Hands On Search” machine.  This means the item you search for on the internet comes out as a solid object.  This machine was introduced to Special Needs Education School for the Visually Impaired, affiliated by University of Tsukuba. You can see it in action in the video below:


It's a cool idea.  If the item a child searches for does not have an affiliated 3D file, the request will be posted back to the community to provide one.

You can read this article to learn more, or watch this video to see how the 3D search machine was made.

You may have already heard of the Peachy Printer, because it is big news in the 3D Printer scene.  Built mostly with common household materials, it promises to bring 3D printing to them masses for $100 or less.  Developed by Rinnovated Design in Saskatchewan, Canada, the Peachy Printer is a cured resin photopolymerization printer (vaguely similar to laser sintering in powder (whose patents, btw, are set to expire next year) but using light to cure (change from liquid to solid) the liquid resin.  Now most liquid resin machines use a vat of the stuff, and the build platform is dropped down using motors, as each layer is cured.  However, this printer is different.

First of all, there are no x-, y-, or z- motors.  The peachy moves a laser beam (using mirrors!) along the X and Y axes to create the shape of the object, while using a drip system to control the level of the resin on the Z axis which determines the height of the object.  That's right - a thin layer of resin sits on top of a vat of salt water.  As additional water drips in, the level of the resin rises, ready for the next layer to be cured.

The software to control the printer starts with Blender, then the printer utilizes the computer's sound card is used to convert the 3D model's digital information into signals sent out the headphone jack to be pulsed analogously by the laser to the mirrors - the audio waveform generated from the 3D model data drives the mirrors - ultimately "steering" the beam on the surface of the resin.  No power cord either - it uses the power from your computer's USM drive.

This is all very interesting.  You can learn more by watching this video:

If you'd like to learn more, you can visit Peachy Printer's YouTube channel.
Posted by C. Mytko at 10:36 AM 2 comments:

Email ThisBlogThis!Share to TwitterShare to FacebookShare to Pinterest
Labels: Hardware and Materials

This is a cross-post, but if you are interested in learning about our new Makerspace furniture and philosophy, we invite you to read this post.  Perhaps the greatest lesson learned is that, "... besides the electronics equipment, none of these materials are new in my classroom.  What is new is their visibility and accessibility." (You may notice our new Printbot Jr. on the desk there.) :) 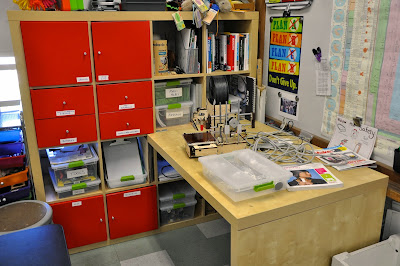 You may be interested to watch this video Science of Innovation: 3-D Printing.  Good basic overview.  Cheesy music.  A little heavy on the patent information.


Interestingly, this video comes with attached lesson plans (Engineering Perspective (Grades 6-12) | Science Perspective (Grades 6–12)) and is part of a 11-part series produced by the National Science Foundation, the U.S. Patent and Trademark Office, and NBC Learn in order to celebrate the 165th birthday of one of America's greatest innovators, Thomas Edison.

The other episodes look pretty cool, too:

Japanese designer Marin Sawa's research uses algae in new and different ways.  Her current project is called a "Algaerium Bioprinter" and can print with so-called superfoods like Chlorella, Spirulina, and Haematococcus.  By the way, science students, these are all names of genus taxa -  Chlorella (in the Protist Kingdom),  Spirulina (in the Bacteria Kingdom), and Haematococcus (Plant Kingdom, or some scientists call it by different names, including Viridiplantae.)  And, I learned that Haematococcus is responsible for the red color that sometimes is found at the bottom of dried-out bird baths!

So, designer Marin Sawa is creating this bioprinter as part of her doctoral research at Central Saint Martins College of Arts and Design in London (a school known for pushing the boundaries of arts, design and performance) and wants to adapt industrial algae farming technology for domestic use.  (Although a growing segment of the population is already trying algae farming at home!)  She hopes to find new ways for consuming health food supplements, and is currently developing the technology to print algal-based energy devices as well as filtering devices.  See more incredible photos here.

Maybe she should meet artists Michael Burton and Michiko Nitta?
Posted by C. Mytko at 2:27 PM No comments:

Email ThisBlogThis!Share to TwitterShare to FacebookShare to Pinterest
Labels: Bioprinting

Bird for Putting on Things

With our newfound appreciation for support material, this Thingiverse file has become a class favorite. 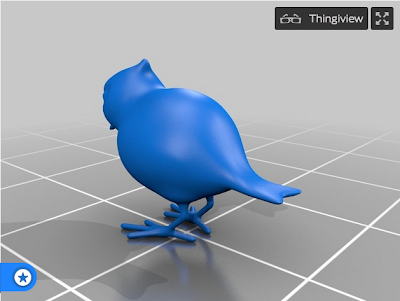 Here is a picture before the support material is removed: 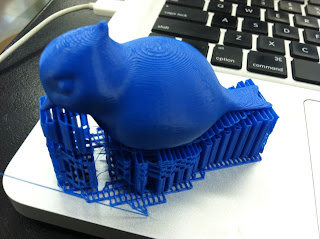 (Caution: support material removal should only be attempted by the most patient middle school students.  I am sad to report that we now have three birds that we cannot put on any things as a consequence of one kid or another ripping one of its skinny legs off as they removed the support material...)

Big companies like acquiring smaller companies and the biggest players in the 3D printing field are 3D Systems and Stratasys.  For example, Stratasys recently acquired Makerbot.  Now, 3D Systems has purchased The Sugar Lab, a small start-up by Kyle and Liz von Hasseln, a husband and wife team from Los Angeles that specializes in 3D printing customized, multi-dimensional, edible confections in real sugar. 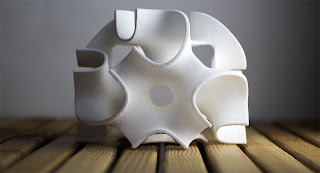 The Sugar Lab, and now 3D Systems, is not the first company involved in the 3D printing of food.  Currently, NASA is funding a phase I six-month $125,000 study on 3D printing of foods.  And Hod Lipson and Evan Malone of the Cornell University Computational Synthesis Laboratory, was dabbling in food with the Fab@Home project since 2006.  And, let's not forget the grad student and his (attempted?) Burrit0bot.

UPDATE 9.19.13:  Yesterday I attended the Inside 3D Printing conference in San Jose, CA and was able to meet Kyle and Liz von Hasseln, as well as check out their new 3D Systems-inspired creation! 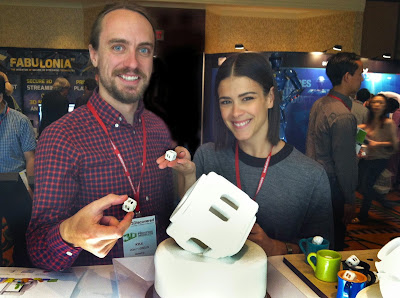 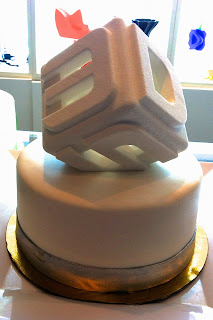 UPDATE 1.4.13:  Here is a recent TEDx talk by Kyle and LIz von Hasseln 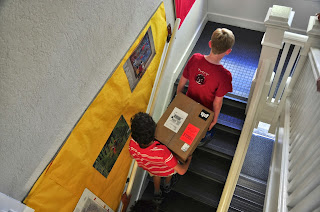 Today, our new Printrbot Jr. v2 arrived in the mail.  This printer is now added to our collection, bringing our classroom collection to three.  Although, to be fair, our original Printrbot (2011) went home with some high school students this summer for experimentation and repair and has yet to be returned.  Word on the street is that its electronics board has been updated, but the extruder nozzle has been lost.  Stay tuned.

Anyway, the kids were very eager to open our new bot. This model is particularly interesting, since it comes with a "travel power source" (like a laptop) and is small enough to fold into a backpack.  Pretty slick. 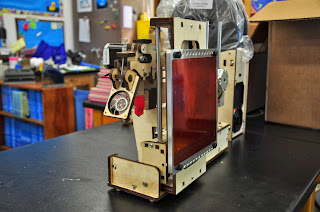 Unfolding it was far more challenging than we expected, and there was no documentation on the web (perhaps because it should have been self-explanatory?)  We figured you had to remove the wooden pieces (1 and 2 below) to "unlock" it. But then we didn't realize that you had to slide the entire assembly up (3) - almost removing it from the posts - in order to lower the platform (4), which can then be secured with a couple of plastic screws. 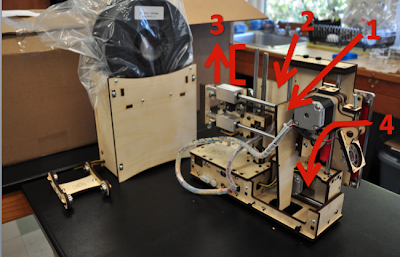 My/our goal(s) with this printer include:

We'll keep you posted as we begin our newest Printrbot adventures! 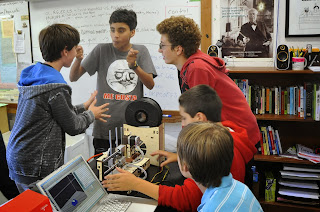 I'll leave you with this image: on my classroom door, there is a dry erase board, which is changed a few times daily (by kids) to reflect what the zebra would be saying... when I was leaving for the afternoon, I saw that, clearly, the zebra approves. 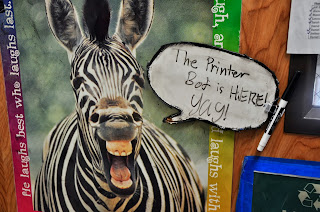