Young 3D Printing Fans Beyond the Walls of BPC

Since this blog is mostly about our 11- (and 12- and 13-) year olds and our shared Printrbot and Makerbot, I thought it'd be nice to share some of the other featured young 3D enthusiasts from around the web.


And this Ignite Phoenix talk from February 2011, entitled "Why I LOVE My 3D Printer,"(see Makerbot blog post) was given by Schuyler St. Leger, then 10- and now a 12-year-old maker who has since, among other things, kept his own Twitter handle (@ProfDocSky), taught a “Arduino 101″ session at the Desert Code Camp software developer conference in Arizona, and gave a keynote speech at Autodesk University Innovation 2012 Forum (!) entitled "Why I'm a Designer & a Maker."  Wow!


Are there any other young 3D printer enthusiasts we should know about?

Email ThisBlogThis!Share to TwitterShare to FacebookShare to Pinterest
Labels: Misc

OK, I have a confession.  I bought an entire roll of yellow filament, just so I could print ducks.  Truly.  And it was worth it.  These used a design downloaded from Thingiverse, cleverly titled Duck.  It prints like a charm, with just a tiny bit of support material under its wings. 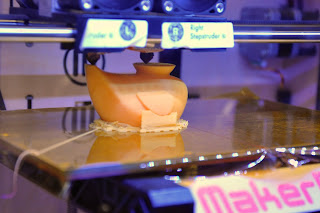 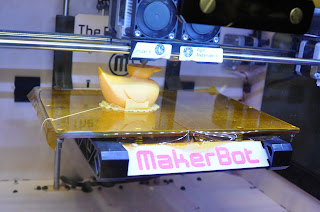 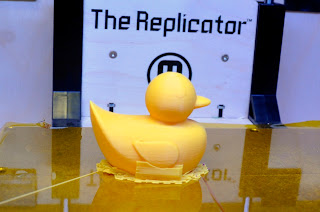 Of course, everything is cuter in a smaller size and multiples, so the kids were excited to try that. Everything we printing well, and I left to teach my tech classes.  When I came back... we clearly had a duck malfunction. 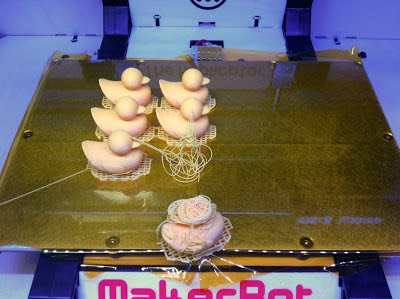 With just the surviving five, the kids were hooked.  Now they ALL want ducks.  The best part it that they are very powerful motivators in these last few weeks of school... 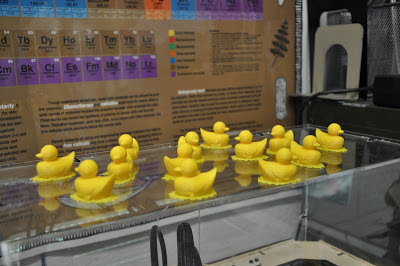 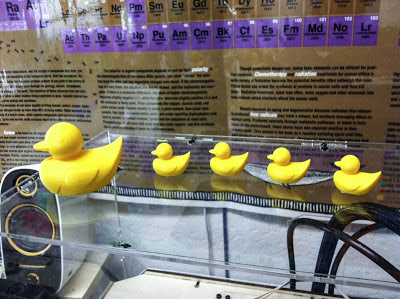 Kaiba Gionfriddo was born with a condition called bronchial malacia, a condition in which the walls of the trachea collapse.  From the time he was 6 weeks until the time he was 3 months, he was in the hospital.  His mother says they had to do CPR on him EVERY DAY.

Kaiba's doctors contacted Dr. Glenn Green, who then got emergency permission from the Food and Drug Administration to do a special procedure which, before Kaiba, had only been tried on animals. Luckily for everyone involved, the surgery was a sucess!


"It's magical to me," said Dr. Glenn Green, an associate professor of pediatric otolaryngology at the University of Michigan who implanted the splint in Kaiba. "We're talking about taking dust and using it to build body parts."knew they had to come up with something, or the alternative would be a life on a ventilator.

The doctors used a laser 3D printer to create a splint to hold open the baby's collapsing airway.  It was a few centimeters long and 8 millimeters wide and made of polycaprolactone or PCL.


When a splint is created using PCL, it becomes a sort of biological placeholder, propping up structures while the body heals around it.

Kaiba is now 20 months old and breathing on his own.  (see cute pic of him here)  Doctors say it will take the implant 3 years to degrade and then, presumably, the trachea will continue growing normally.

It's worth reading the whole article.  Or, you can read the published paper in the New England Journal of Medicine, "Bioresorbable Airway Splint Created with a Three-Dimensional Printer"!

From Figure 1 in the publication... 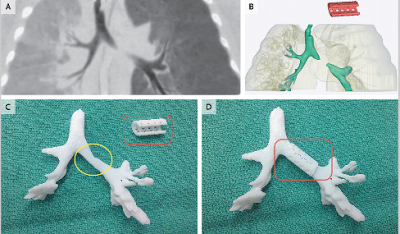 UPDATED 6.26.13  This University of Michigan Health Systems article has more detail on this story - well worth a read.  It also includes this video:


Th article clarified for me that the splint was "sewn around Kaiba’s airway to expand the bronchus and give it a skeleton to aid proper growth. Over about three years, the splint will be reabsorbed by the body."


“The material we used is a nice choice for this. It takes about two to three years for the trachea to remodel and grow into a healthy state, and that’s about how long this material will take to dissolve into the body,” says Hollister.

This article also states that severe tracheobronchomalacia is rare: Of the 1 in 2,200 babies born with tracheomalacia, most grow out of it by age 2 or 3, although it often is misdiagnosed as asthma that doesn’t respond to treatment. Severe cases, like Kaiba’s, are about 10 percent of that number.

If you are interested, the University of Michigan Pediatric Medical Device Consortium (M-PED) created a 28-minute video entitled "Innovative Pediatric Manufacturing: Strategies & Solutions - A Guide To Bringing Your Device To Market" which discusses FDA requirements for manufacturing medical devices for children (and adults).
Posted by C. Mytko at 8:54 AM No comments:

Would you 3D Print Your Fetus?

So, I've noticed a somewhat bizarre trend lately with expectant moms.  They will often put their ultrasound pictures out on their desk next to the other family photos... some even have specialized ultrasound frames.  (Apparently, there is a whole market out there that I do not know about!)

Well, now those expectant parents can add a 3D model of their fetus right there with the pictures.

Japanese company Fasotec will make a miniature 3D replica of your fetus and hand it off to you in a lovely jewelry box, marketed as "The Shape of an Angel"  for about $1250 (as of 2012).  Yep.

Brazilian company will do this too, for about $200 for a full model of a fetus at 12 weeks, and about $300 for the face and arms of a fetus at 24 weeks.  This company does bring up a pretty legitimate reason - allowing visually impaired expectant parents to "see" their fetuses in a way ultrasounds cannot.  That's pretty cool.

Today, a student used Sketchup to replicate a Star Trek 3D Chess Board.  We all realized we'd need a little work with scale when we imported the file into RepG. 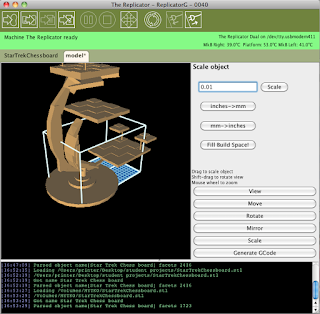 Anyway, we got scaled down and printed with full support.  And it was a LOT of support material.  The aborted the first print when we realized the supports for the boards were not actually touching the main support and the student headed back to Sketchup to make improvements. 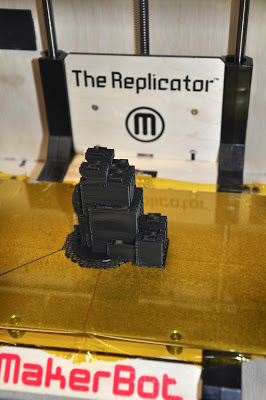 Final print had some minor issues, but nothing a little tacky glue couldn't fix. :) 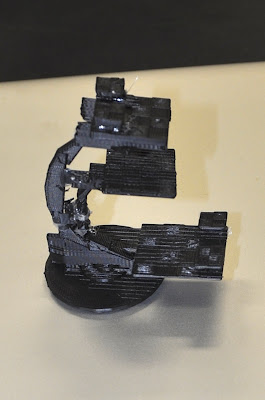 We printed another chess piece today.  It worked fairly well, and we were happy to learn it did not need external support.  As you can see, it is a little drippy under that top shelf area, but not too bad. 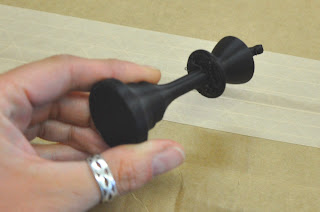 Our First Chain of Awesomeness

At the Engaget Expand conference, I had the pleasure of experiencing this amaxing chain at the Maketbot table.  I was determined to make one. 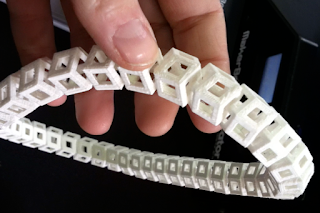 The kids were on board, so we got to printing the Rhombic Dodecahedra Chain, downloaded from Thingiverse.  It prints in a single print, and flexes right off the raft.  It was incredible to watch and hard to wrap one's head around. 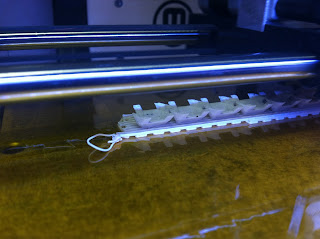 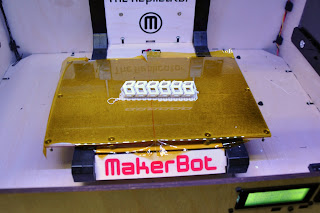 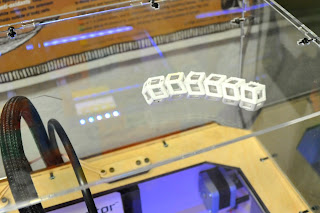 
Looks like we have plenty to experiment with!
Posted by C. Mytko at 11:32 PM No comments:

We printed our first printer part!

We 3D printed our first 3D printer part! We were fixing our Printerbot, when we found a gear was worn. We found the plan for the broken gear on the site where the shapes of all the Printerbot parts are stored.

We printed the file, and... 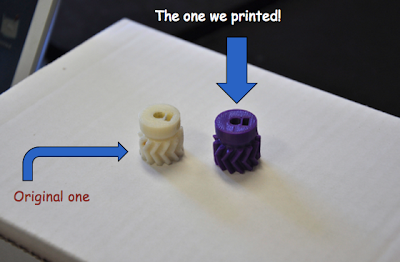 With the new gear, our Makerbot helped our Printrbot get up and running again! 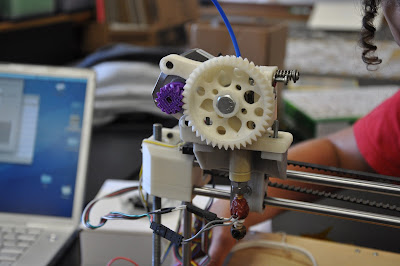 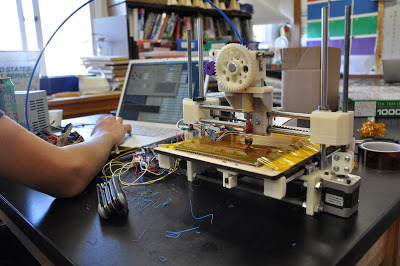 Posted by starspatteredsky at 6:39 AM 2 comments:

Email ThisBlogThis!Share to TwitterShare to FacebookShare to Pinterest
Labels: Our BPC Story, Stuff We Print

We've come a long way since Brook Drumm helped facilitate my purchase of my first 3D printer (see video - 2011 - below).


At the MAKE Hardware Innovation Workshop 2013, I was lucky to run into Brook again, and let him know what we've been up to.  Our Printrbot has since been joined by a Makerbot I.  Our kids are becoming well-versed in open-source software and terms like 'gcode' and 'stl converter.'  And some of them are even saving their Bar Mitzvah money to buy one!

During his presentation, he told a story of a student (not from BPC) who, too, wanted to purchase a Printrbot for his Bar Mitzvah. This kid's father ended up purchasing a Printrbot as a gift, but asked Brook if he could come buy, bring a bunch of printers, and be the entertainment!  He also told a hilarious story about taking a new, battery-powered Printrbot Simple on an airplane.  He quips, "he's probably the only guy who has 3D-printed at 30,000 feet!"

Brook spoke as part of a presentation entitled "New Dimensions to 3D Printing - Additive manufacturing is heading in new directions, including the cloud."  He was joined by Peter Weijmarshausen (co-founder and CEO, Shapeways), Nick Pinkston (founder, Plethora) and Wayne Losey (co-founder, Dynamo DevLabs).

Here are a couple of things I learned from the talk, in the meantime:

(during recess the other day)

How quickly the 3D printer becomes just another thing that we do to occupy ourselves. :)

Today we experimented with multiples... 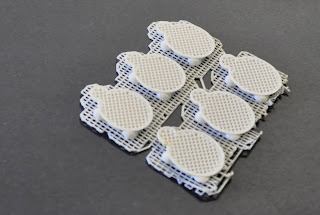 Although our turtle print failed, we did learn the process...

STEP 1: Edit the Slicing Profiles in Replicator G - You can do this any time, there does not have to be a file loaded, nor does your printer have to be plugged in.  Go to GCode >> Edit Slicing Profiles.  Then choose "Duplicate" (of any profile) and it will ask you to name your new profile.  We learned from experience to come up with a very clear way to name our profiles, since we got a little obsessed with multiples combinations. 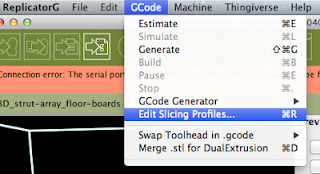 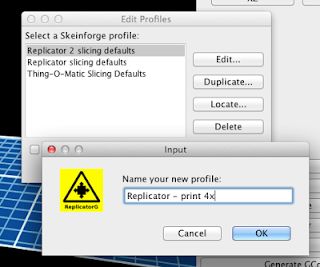 STEP 2: Modify the profile to make make multiples - This will require choosing the button in the last column, second row labeled "Multiply."  Then check the box "Activate Multiply." Finally, you can choose the number of columns and rows in the blue shaded boxes.  You will see I chose 2 and 2, so I will be printing 4 multiples at a time.  A final cool option is to check "reverse sequence every odd layer." 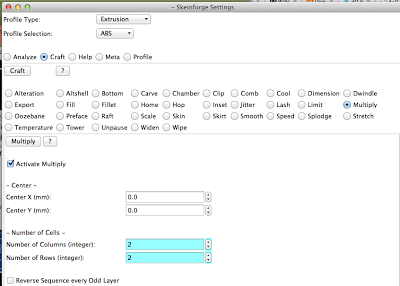 STEP 3: Choose the correct profile when printing - When you go to generate gcode, don't forget to select the slicing profile from the top of the pop-up. 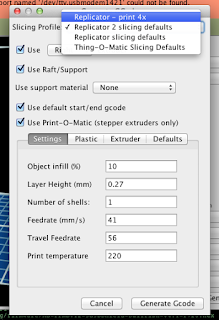 Email ThisBlogThis!Share to TwitterShare to FacebookShare to Pinterest
Labels: Software and Programs, Stuff We Print

Bioprinting is printing cells on "biopaper" made of collagen. The cells come out in a matrix of gel that protects them as they print. The bioink (cells) are printed in groups of thousands of cells

Eventually, we will be able to print organs that won't be rejected by bodies, because they will be made of the same cells as the rest of the body. This would be a huge development for medicine because huge numbers of people  are on waiting lists for organs without enough donors.

UPDATE:  An excellent, comprehensive article on this subject was (2D!) printed in the August 2013 issue of Popular Science.  Read more here.
Posted by C. Mytko at 4:46 PM No comments: