Many people have experienced the traditional plaster cast - bulky, smelly, and itchy.  Well, Jake Evill, a recent design graduate from the Victoria University of Wellington in New Zealand, is set to change all that. (pun intended)

Evill has developed he prototype idea for Cortex, a revolutionary cast that is "fully ventilated, super light, shower friendly, hygienic, recyclable and stylish."

Here are the basic steps involved in creating a Cortex cast: 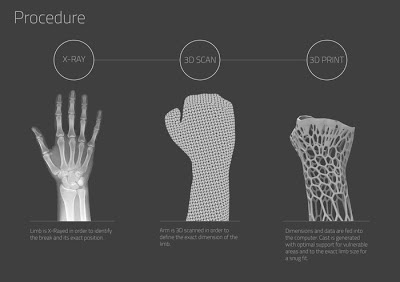 Based on the scan data, computer software would determine the perfect design for your cast, providing more dense support in the area of the fracture.  Once on, the cast would close with fasteners that would later be removed using specialized tools, must like how plaster casts require a trip to the doctor for removal now.   The resulting cast would be about 3 millimeters thick and weigh less than 500 grams.

Evill began his process with noticing that traditional casts are heavy and gross.  Then he looked around to see what kinds of alternatives existed.  He found none.  So, he decided to work on his own idea.  Evill began by researching the structure of bones, and was inspired by the trabecular (or spongy, or cancellous) bone that makes up the inside of long bones, providing structure without a lot of solid weight.  “It was this honeycomb structure that inspired the Cortex pattern because, as usual, nature has the best answers,” he said. “This natural shape embodied the qualities of being strong whilst light just like the bone it is protecting within.” (from Wired)

According to Wired, Evill used an Xbox Kinect to scan the arm for his prototype (Perhaps the same $80 scanner I was able to play with at this meetup event last weekend?  Lots of tutorials on how to do this: 1, 2, 3, or you can search tutorials on YouTube.) After cleaning up the scan, he sent the file off to Shapeways to be printed.

Some critics (what's wrong with you people?) complain that a 3D printed cast would take too long to print.

"At the moment, 3D printing of the cast takes around three hours whereas a plaster cast is three to nine minutes, but requires 24-72 hours to be fully set," says the designer. "With the improvement of 3D printing, we could see a big reduction in the time it takes to print in the future."

It's important to realize that the Cortex cast is only a concept now, but may easily be incorporated as the medical field gets more and more involved with 3D printing.

You can check out Evill's other work on his website, including Pola, a conceptual design for a virtual camera that create and then pushes (physical) images out from the side of your head.  I kid you not.

You can read more about Cortex at Wired & dezeen.
Posted by C. Mytko at 12:32 PM