#tbt The origins of 3D printing at BPC

It all started at the Maker Faire.  In 2009, I recall standing in front of a table showing off a Rep Rap 3D printer, described as a "self-replicating machine."  Time stood still as I tried to wrap my head around this.  Did it print its own wires?  The metal poles? (It did not, I later found out.)  However, the seed was planted and I was intrigued.

However, the skill-level needed to assemble a kit and the cost of a pre-assembled machine both seemed like formidable barriers to difficult to overcome.  However, I had some students who believed that anything was possible (especially when they are spending other people's money...).  One student in particular, Adam, was determined to talk me into buying one.  Knowing that our skill level combined was still lacking, I opted to find a way to bring the price down to a reasonable amount.  I began attending all the tech events I could and networking... after all, you never know who you might meet!  I even sprung for some Office Depot-printed business cards. :)

After a few years of opportunistic networking and Adam's logic as to why we *needed* a 3D printer at school, I attended the NextGen Science Fair in 2011.  Here I met Brook Drumm and he would become instrumental in helping us begin our 3D printing journey.  Brook had his new 3D printer on Kickstarter, with the goal of "a printer in every home (and school)."

Adam used a page from a classroom book called Geek Logic, which uses algebra to "help" you decide such pressing issues as "Friends or girlfriend?" "Should you walk, bike or drive?" and "Should you eat something scary from the back of the fridge or just order Chinese food again?"  He did the calculations for "Should you buy something or not?" and, as you can see in the illustration below, the answer was 2.912, which was clearly greater than the recommended value of 1.  This only supported his belief that we should buy a 3D printer for the classroom.  Adam even boxed in his answer as instructed in math class!  (My favorite part of this story is that, 2 years later, Adam used his Bar Mitzvah money to buy his own Printrbot, which he assembled from a kit!) 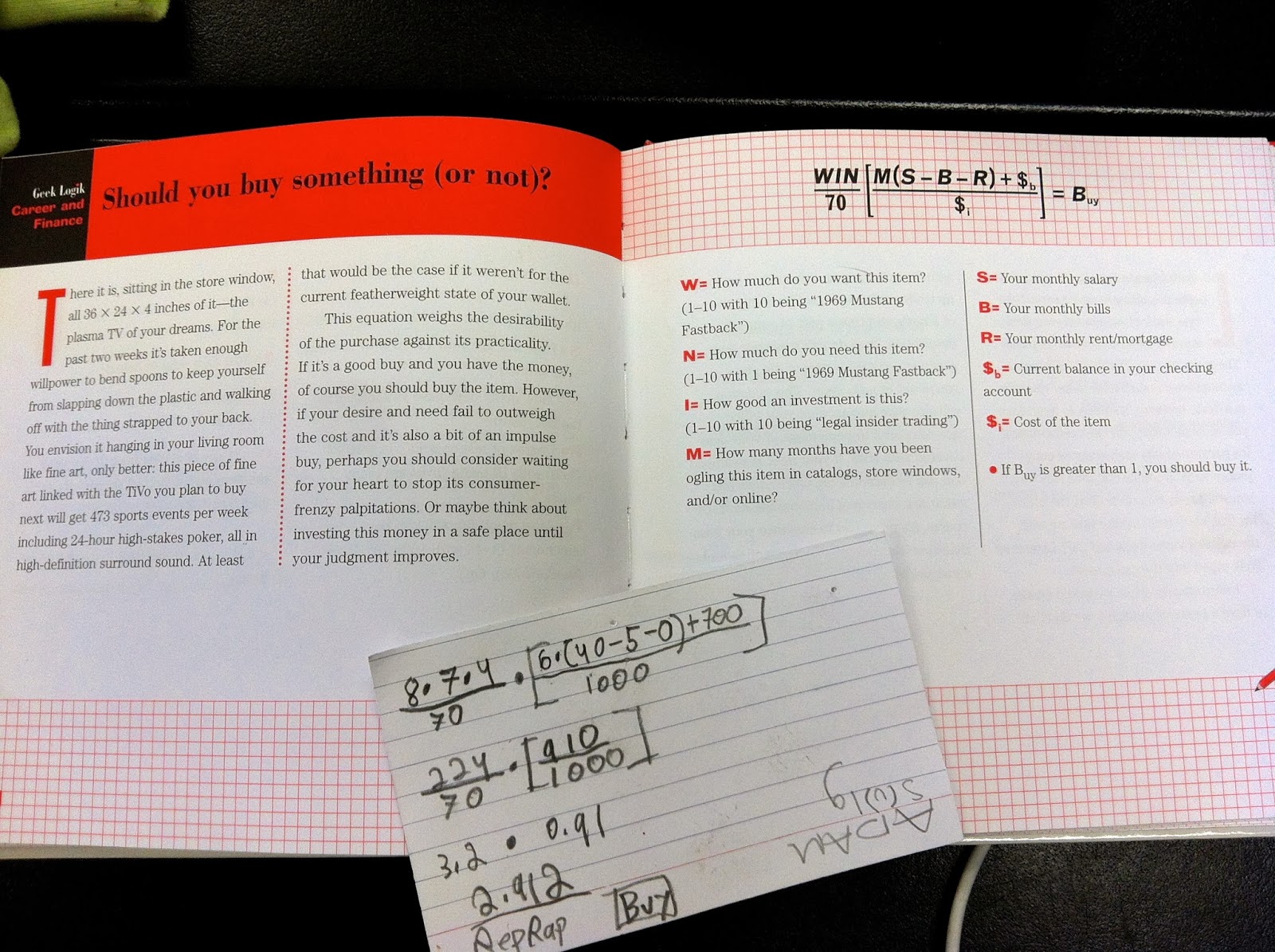 Brook offered us a generous discount to get started and about the same time I was fortunate to win a teaching award, so it seemed everything was in place to purchase our first 3D printer!  Brook even came down with the printer to help set it up and teach us how it worked!  (You can read Printrbot's side of the story here.)

Watching the video now, I am surprised in how far we have come!  Tinkering requires patience, and students can be better at taking things apart than putting them back together, so soon I wanted a more reliable machine that I the kids would not be able to take apart.  A more reliable machine so that I could have the kids focus more on the CAD design and less on getting the machine to work (though this is a valuable lesson in itself).

Finally, I purchased a Makerbot Replicator 1 with Dual Extrusion.  (Not that we can get the dual extrusion to work - it's supposedly easy, but we haven't yet successfully printed a merged stl file!)  The first print we made on the Makerbot was a preloaded file from the included SD card.  The first modified design we printed was a pen (see "inspiration" below).  Originally from Thingiverse, one of the then-6th graders was determined to create our own, personalized version. 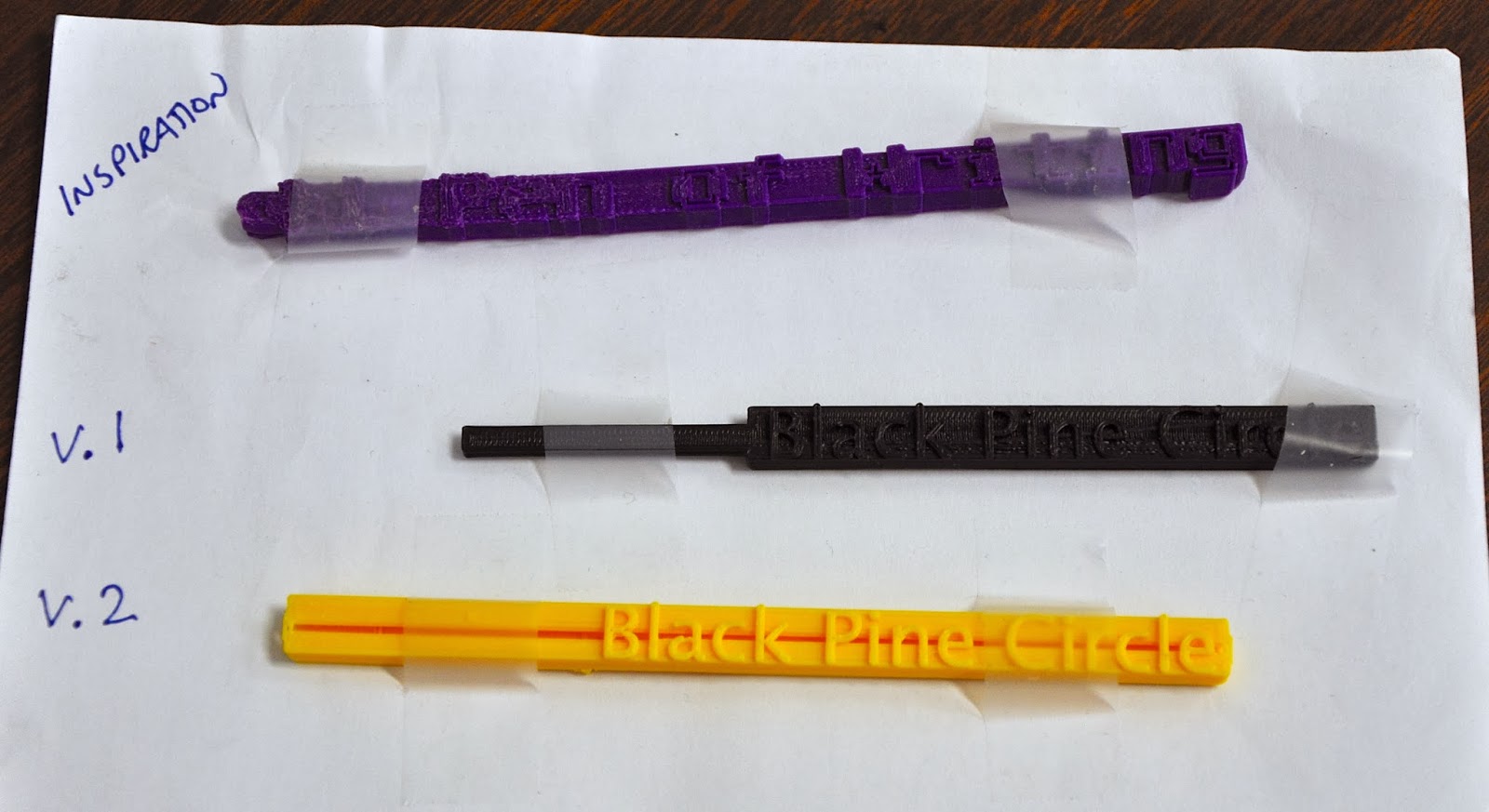 This Makerbot (which I paid for out-of-pocket) inspired our first formal BPC 3D printing after school club in the spring of 2013.  Partly to recoup some of the cost of the machine and mostly to have a sandbox environment to experiment, a small group of students and I met weekly and this blog was born! :)

After a wonderful summer opportunity involving 3D scanning, modeling and printing at the Advanced Light Source at the Berkeley National Labs, I was excited to learn more with my students during the 2013-2014 school year. Plus, the summer stipend made it more palatable to purchase my classroom's third 3D printer.  This time, going back to our roots, we went with Brook Drumm's newly released Printrbot Jr. v.2, again with a generous discount.  This gave us a chance to work with PLA, especially in light of some recent research about ABS ultra-fine particulate.

We were seemingly set with 3D printers, but who were we to turn down a free Cube printer offered by one of the educational team members at 3D Systems?  We had some trouble with the first one, but 3D Systems quickly replaced it with a fully functioning machine.  We had our share of trouble getting the second one started, too, but after the initial bumps it has been very reliable. This is our first truly proprietary machine, and we've had mixed feelings about that, but it is now the most dependable machine of the bunch.

UPDATE 5.20.14: Just in time for Maker Faire, we received a gift of a new Printrbot Metal Simple. Read more here.

"The Cube is best for high-precision parts, or parts you need right away.  The Makerbot is my favorite, because it balances the ease of use with the ability to control it and tinker with it." (Jane, 7th grade)

"My Favorite printer is the MakerBot because it has a good customize ability  to working ratio and we still have not figured out dual extrusion so I have and end goal." (Abe, 7th grade)
[to be added]