As we are nearing winter break and are in the midst of the holiday season, we decided to build a three-dimensional, recyclable, life size Christmas tree, because, well, why not?
At the start of Maker Club on Thursday, December 13th, Ms. Mytko gave us a 6 foot PVC pipe and told us to make a tree.
It involved a lot of trial and error, and at the beginning we were very disorganized. We had about 8 people working on the tree. About 2 or 3 on making the base structurally sound, 1 person on making the pyramid on the top, 2 people on making squares, and a couple people milling about, unsure about what to do. As time continued, we slowly became more organized. We had two people on cutting squares, and three people on cutting holes in the center of the squares so they could go onto the PVC pipe. We couldn't possibly cut holes in flat cardboard slabs fast enough, until Ms. Mytko came by to give us a suggestion. We cut little x shapes into the center of the cardboard like little flaps and the forcefully shove them onto the PVC pipe. Then we really got into motion. WE had a whole system. One person cutting more squares and passing it to another 2 people finding the midpoint of each square, and us passing those to 2 other people to cut the squares, and then finally, to the last person who tested them on the tree "trunk."
By this time, it had started to grow dark and we hadn't put anything on the tree yet, so with help, we lined all the squares up from biggest to smallest and applied them to the trunk. After around ten minutes of forcing cardboard on pipe and duct taping (of course) everything for structural support, we topped it with the pyramid and admired our work. Someone put the first cardboard ornament on the tree! We threw some fairy lights on it to add to the effect and our Maker Tree was complete!
In Friday Maker Club, people made more ornaments for the tree and hung them up!
It was a great success 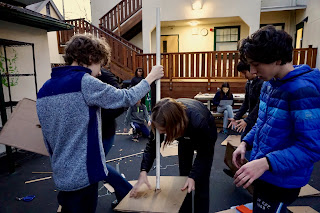 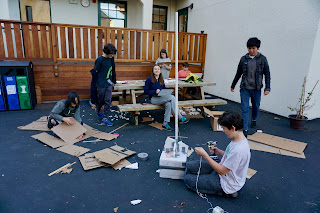 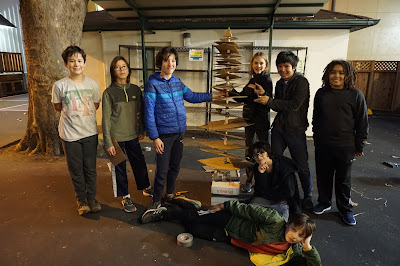 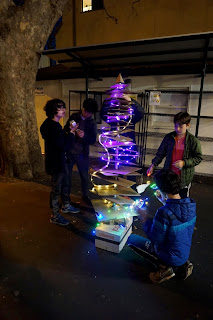 Posted by Anonymous at 9:02 AM