Tales of Many 3D printers #tbt

Is there such a thing as too many 3D printers?  I contemplated this over the weekend, as Facebook "memories' reminded me that I purchased my Makerbot Replicator 1 exactly three years ago. Looking around my classroom, I realized I have owned 10 3D printers. So, on this anniversary of sorts, I present: Where are they now?

[pic of printer in bin]

3. Cube
Our first Cube performed great until a problem forced us to replace it. The replacement also worked well, at least until it caught fire.

5. Printerbot simple metal
Gifted by Printerbot before maker fair 2014, the kids abandoned it, and it now resides Sam.

6. Droplit
We got this as a kit that some Maker Club kids assembled. Unfortunately, the kids that put it together forgot to document the process, and it now sits in a corner. We plan to start repairs after Maker Faire, but until then, it will remain in it's corner, starring down on those who abandoned it.

7. Afinia
The Afinia is the most reliable printer we have used to date. The print quality good, but the rafts are hard to get off. It currently is suffering from a clogged extruder, and will be fixed soon.

8. maker bot rep 1
We got this one for 90$ at a maker clearance event brand new. It worked fine for a while, but there is currently

9. maker bot rep 1
This was also from the clearance event, and was also brand new.

10. Buko bot
We the Bukobot got to act as a more "kid friendly" printer (also because it could print upside down), but there is something wrong, and cannot move on the z axis, and will make grinding noises if attempted. 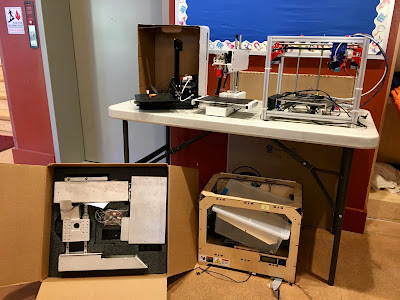