I saw this YouTube video yesterday and decided to try this--a process to engrave in almost any type of metal using salt, vinegar/water, and electricity. It takes some experimenting to get right, and you have to use the right kind of battery, but otherwise it works pretty well.

We learned in our first attempt that it won't work on lids for mason jars, because the surface isn't conductive. You'll want to test for conductivity on your material before you try to do anything. We were initially misled, because it "worked" the first time. In reality, water had leaked under our stencil, completing the circuit. Once we made a tighter seal (by using sticker paper for our stencil), it was no longer conducting anything and no longer worked.

Eventually, I successfully engraved in a sheet of stainless steel using a 12v battery.

First, you need to prepare the metal surface. Clean it using rubbing alcohol (91%). (As mentioned, the lid in the picture won't work, but it does illustrate the cleaning step.) 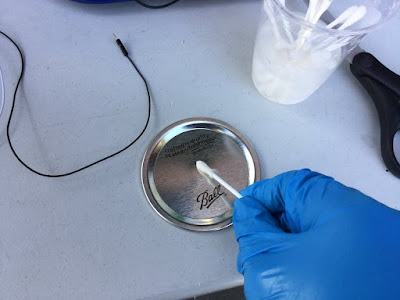 Soak some Q-Tips in a mix of vinegar and salt. You can also use water with just salt but it won't be as strong. The amounts don't matter but you can watch the video (1:28) to get an idea. 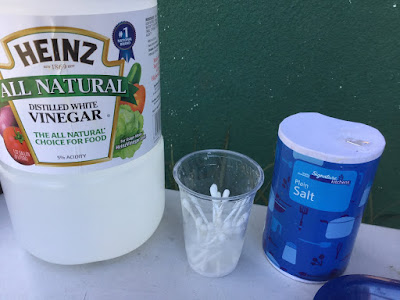 You need a power source. We tried using a bunch of 9v batteries but found that this lead-acid 12v battery worked better. 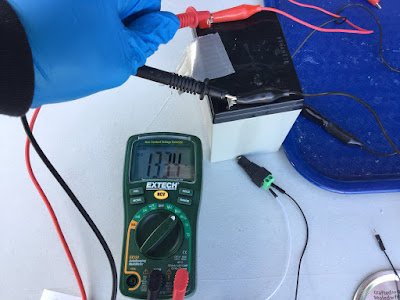 I laser cut a name tag onto transparency paper with a stencil font and stuck it on with some blue tape to prevent the liquid from leaking around the stencil, but you can also use sticky stencils or something else. The video also shows how to use stickers and nail polish to make more complex shapes. 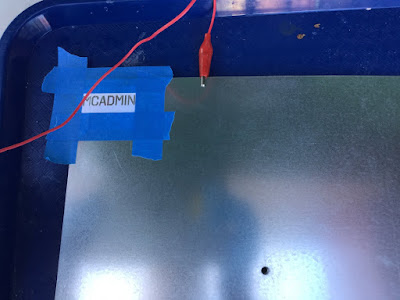 Connect one end of the battery or power source to the metal and one end to the end of the Q-Tip, making sure the alligator clip on the Q-Tip won't touch the metal surface. 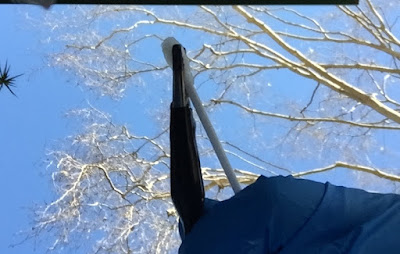 Put the Q-Tip on the metal in one spot for around five seconds and then move it to the next spot. It makes a bubbling sound and some smoke. I wiped any liquid off of the surface after each letter. 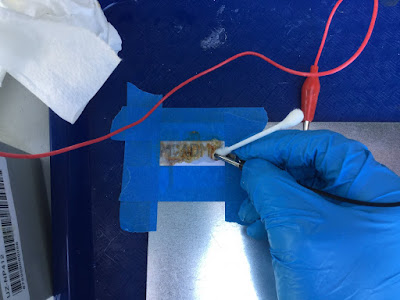 Here's the result after cleaning: 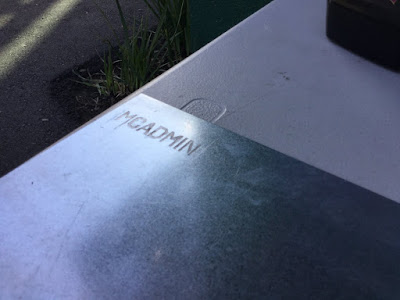 Also, that YouTube channel is great for other DIY projects and car work.
Posted by Unknown at 4:49 PM

Email ThisBlogThis!Share to TwitterShare to FacebookShare to Pinterest
Labels: Stuff We Make