Back in April, our Ultimaker 2 Go stopped extruding.  This is not unusual.  The standard procedure is to take a look at the extruder and maybe unload and reload the filament, checking for errors. Unfortunately, one of our students decided it would be a good idea to take the entire 3d printer apart. The student took apart the entire extruder and, in the process, broke the temperature sensor and the heater cartage. 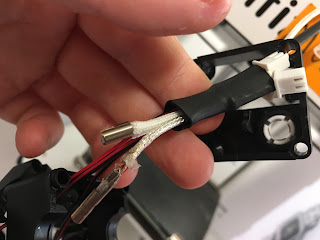 Despite our teacher's constant reminders to document, there was no documentation, except photos that were lost (the photos in this post were taken after the disassembly).  After disassembly, what used to be a 3d printer extruder looked like this: 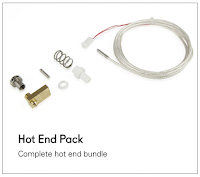 So, we were left to reassemble a broken 3D printer with very little documentation and no recollection of "what happened."  The Ultimakers came with an extra "Hot End Pack," which includes a temperature sensor, a nozzle block, and various other extruder related parts.  At first, we thought this would solve the problem. But ends up the pack did not come with a heater cartridge, so we were stuck. The Dynamism site (where we first ordered the printer) sold only a few, more consumable, parts--and not the parts that students might destroy.

Luckily, Ultimaker support eventually clued us in to the fbrc8 Ultimaker warranty site. This was VERY helpful! We found a heater cartridge and ordered one.

Back in the classroom, we replaced the broken temperature sensor with the one from the "Hot end pack" and the heater cartridge from the fbrc8 warranty site using this fbrc8 resource: Changing Heater Cartridge And Temp Sensor (2GO).  We had to open the bottom of the Ultimaker to plug the heater cartridge back in. It was good practice in reading the instructions very carefully! 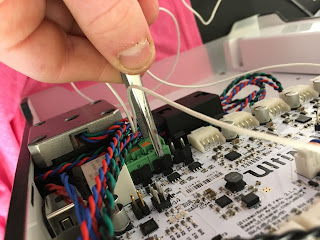 Finally, for reassembly, we followed the Changing Parts In The Print Head steps for disassembly and reassembly, even though most of our parts were already... ahem... disassembled. We also used the instructions: hot end assembly | hot end disassembly

Eventually we reassembled everything and were proud of our efforts when it printed flawlessly once again! 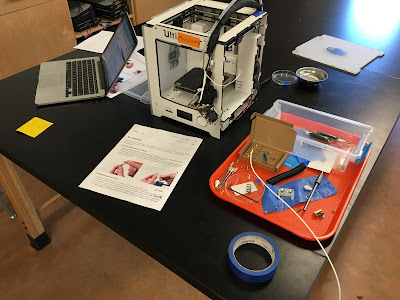